A coalition of municipal governments from across the province, but with a heavy input from Northern British Columbia have welcomed the new mandate for the NDP government of John Horgan, while at the same time urging him to remember the needs of northern and rural communities.

But while there are a range of familiar names included as signatories to the document, missing it seems is any contribution from the North Coast, with neither the Mayor of the City of Prince Rupert or that of the District of Port Edward included in the document.

The project which was put together by the organization Resource Works notes how resource-reliant communities are calling on the Premier to remember how natural resources hold the key to economic recovery during the ongoing issues of the COVID-19 pandemic.

The letter which was signed by Terrace Mayor Carole Leclerc, and Kitimat Mayor Phil Germuth from the Northwest has five key points to make, asking Mr. Horgan and his new cabinet to take the following actions:

Move quickly to enable shovel-ready projects to proceed;
Send the right messages to international investors to ensure that B.C.’s most resilient industries can succeed in uncertain global investment conditions;
Recognize in your economic planning the unique advantage of globally carbon-competitive exports from B.C.’s resource-based industries;
Put workers and communities first as your government delivers on its campaign commitments;
Ensure that any new regulations affecting the ability to deliver on the first four pillars during the pandemic recovery period are considered carefully.

The full letter was published in the Vancouver Sun on November 20th, with the Mayors that participated in the Dear John letter, noting how as resource supporting communities they will work with the NDP government to achieve some shared ambitions.

While you bring together your new cabinet to take on major challenges like the pandemic recovery, presenting an effective response to climate change and the important work of First Nations reconciliation, we, as the mayors of resource-supporting communities around the province, want you to be assured that you will have our support in the work that is ahead.

We welcome the opportunity to share with you and your colleagues our thoughts on how the voices of resource communities can be heard around the cabinet table and in your re-elected government’s mandate.

You can review the full text of the letter here.

The letter is part of a public awareness campaign launched by Resources Works, which includes a public petition for residents of all communities in the province to deliver a message to the new government as they prepare to take on their first full term as a majority government.

You can learn more about the petition and sign on if you wish here.

Further notes on what Resource Works is all about can be reviewed here.

Last week, Premier Horgan introduced the team that will shepherd his plans through the Legilsature, you can review who made the cut and what job they have been assigned here.

Of those named to their posts on Thursday, the themes of the Resource Works/Northern Mayors project should be of some note for Stikine MLA Nathan Cullen. 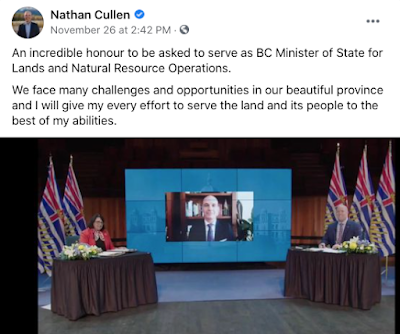 Mr. Cullen was assigned the post of Minister of State for Land and Natural Resource Operations, which will put him in frequent contact with many of those who signed the document earlier this month.

More notes on the Provincial government and its work out of Victoria can be found here.