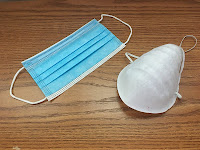 A Smithers resident who was not inclined to follow the Public Health Order from Doctor Bonnie Henry found himself detained by the RCMP on Friday, after members from the Smithers detachment were called to an incident the Bulkley Valley Credit Union.

When they arrived they found Randy Bell, a former candidate for Smithers Council refusing to put on a mask after a number of requests and then refusing to leave the Credit Union location as requested.

Mr. Bell decided to make his interaction with the RCMP part of a Facebook moment, documenting his interaction and eventual detention by the RCMP as part of the incident, he was subsequently released without charges and advised to review the current Public Health Orders.

He has had two previous runs for civic government, most recently in the Municipal by-election, when he came in third out of the four candidates for the council seat.

Mr. Bell also ran for the mayoralty back in 2018, losing to then incumbent Taylor Bachrach.

His past social media history also shows his support for the People's Party of Canada .

The federal party led by Maxime Bernier has expressed a number of themes in recent months related to their differences in the current approach of Federal and Provincial governments when it comes to COVID measures.

Earlier this month we outlined the latest data from BC Centre for Disease Control, which noted that as of October 31st the Bulkley Valley had recorded 42 cases of COVID-19, a number that made for the most number of cases in the Northwest, and making the Smithers are second only to Prince George when it comes to reported cases.

You can review the full list of COVID related measures from the Public Health officer here.

On Friday, Mike Farnworth, Minister of Public Safety and Solicitor General outlined how the province intends to enforce the public health orders.

More background on the province's approach to COVID measures can be explored from our archive page here.