A rezoning request for parcels of land along 11th Avenue came up for discussion on Monday evening, marking the start of a journey that may at the end of what appears will be a lengthy process,  provide for some additional residential housing in the community.
The City's Corporate Administrator Rosa Miller, who of late it seems has become the primary contact person at City Hall on planning issues, provided the overview of the report from Operations Director Richard Pucci.
A document which outlined the process ahead towards potential rezoning the land in question in the area of 11th Avenue East and Edward Avenue towards development of an apartment building proposal.
The Zoning change request filed on November 20th would see the land in question change from its current status of R2 to RM2  which is multi-family residential development. 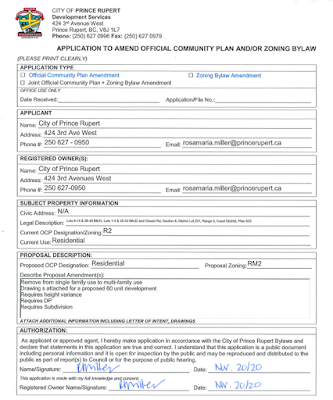 In her presentation, Ms. Miller noted that it is a rezoning application, not a development permit and that all concerns are typically dealt with through the development process, with a number of considerations still to be reviewed.
The Corporate Administrator added that staff understands of the delicate nature of this file and will reiterate any concerns to council for consideration, adding that they city is not looking to waive public consultation but will need to amend the process due to COVID 19 with an extension to the timeline in place towards the production of packages for pick up and drop off.
Towards that amendment, she outlined how the city will instruct the applicant to distribute an information package and modify the requirement for community information session and not to waive the requirement for a public hearing and that Council further considers the height variance as part of the zoning amendment.
The entire fifteen minutes of review of the zoning request managed to move forward without anyone on council mentioning the proponent of the proposed development for the 11th Avenue and Edwards Avenue area by name, nor the nature of the development that they have proposed.
Something which we outlined a few weeks ago, that after the Lax Kw'alaams Band Council had shared their enthusiasm for the proposed development that would add 60 units of housing for their members living in Prince Rupert.

Mayor Brain opened the discussion on the topic, by noting how the required information session by the proponent would likely be a virtual process owing to COVID, Ms. Miller further elaborated that the process ahead would include the information package or session, a second reading of the zoning request followed by a Public hearing after the second reading and then the third reading.
Mr. Brain then observed that more information on the website is available related to how rezoning themes move forward, and that the session of Monday made for the first point of contact on the project, adding that he was aware that the community was already aware of the project.
He then outlined how the packages would be delivered to homes within a radius of 100 metres, with the information packages also available to the residents at City Hall.
Mr. Brain also noted that there would be an Information Session which will likely be virtual at this time, with the opportunity for community residents to speak to the proponent on the proposal.
After Second reading, should Council move forward there would be a Public Hearing, which is when they collect letters and feedback whether in favour or opposed to the proposal.
The Mayor observed that the city has already received letters related to the proposed development noting that right now is not really the time for that input into the process.
"At the public hearing portion, that is where we collect the entirety of the feedback based on the kind of the final designs I guess you could say of the project. So if community members when it comes to letters or showing up to express support or not your support whatever it is your views, that is when we collect all that feedback. So we've had some letters already and right now is not necessarily the time in the process for letters and that type of thing, it's more at the public hearing piece after all the information has been kind of distributed and the community has time to talk to the proponent and council gets all the information" -- Mayor Lee Brain explaining the chain of information gathering related to the rezoning request for land at 11th Avenue East and Edwards Avenue
Any deliberation on the process would come following the Public Hearing, as part of that process Mr. Brain noted that he anticipated that the current proposal would continue on into 2021.
Councillor Niesh outlined that one element they could consider is to expand the 100 metre radius to 200 metres, to ensure that they capture more of the people in the neighbourhood that would be affected by it.
"I would like to maybe make a motion to expand the 100 metre radius to maybe like 200 and the reason that being said, is that there is not a lot of places that are directly in that 100 metres and I think that if we spread it out a little bit more it will actually capture more of the people in the neighbourhood who are affected by this"
The Mayor seconded the motion of expansion of the distribution area for the information packages, Councillor Cunningham followed up by asking that the city ensure that all of Edwards Avenue received the information package noting that there has been quite a bit of interest from people on that street in the project and how they all should be included in the distribution plan.
Ms. Miller also noted that if anyone in the area did not receive a package they could contact city hall and they would be provided one, the Mayor also observed that it would be available on line.
Councillor Mirau inquired as to the city's status on the land, asking if they would be retaining ownership of the land to be developed, with the land in question leased to the proponent. Mr. Brain confirmed that the city would remain the owners of the land, comparing the situation to the recent land arrangement for the Crows Nest  Lodge.
At the vote, the motion to consider rezoning of the land moved forward with no opposition from the council membership.

You can review the report to Council from our notes from Monday, which also provide a bit of history towards the city's work on the rezoning themes to this point.

The full presentation and discussion that followed can be reviewed from the City's Video Archive starting at the 37 minute mark.

More notes on Housing in Prince Rupert can be found from our archive page here.

Further background on Monday's City Council Session can be reviewed on our Council Timeline feature.