Some recent winter weather has served to bring one Prince Rupert City Councillor's most important topics back to the top of the discussion list this month.

With Councillor Barry Cunningham once again exploring his concerns over the dwindling level of health care services locally, an evolving situation that now require Prince Rupert residents to travel the Highway 16 corridor to seek out some medical attention.

The councillor returned to what is an ongoing theme for him earlier this month with a Facebook post, spurred on by his travels along Highway 16 around Remembrance Day. 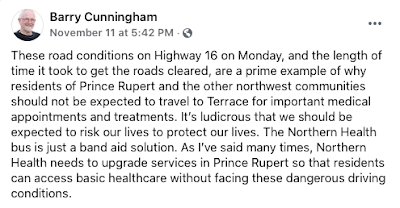 As he notes in his social media post, he has raised the topic of health care often in the past, though results it seems have been hard to achieve from those many expressions of concern.

Much of City Council's focus on health this year was related to COVID measures and how they and the province disagreed on how the COVID response was taken in Prince Rupert.

A period of time where the Mayor and his council seemed to withdraw from the debate on a number of themes,  instructing residents to  direct all their conversation towards a range of issues to the MLA and the provincial government.

Last year however, in the pre COVID days, the larger issue of health care in Prince Rupert did make for some discussion.

Interestingly enough the topic of the need for more health care in Prince Rupert did not make for a large segment of the recent provincial election campaign, with little input on the topic provided by the city's elected officials during the six week campaign period.

Still, with North Coast MLA Jennifer Rice returned to office, the opportunity to invite her to Council to hear the concerns of Council and local residents is one option that they could take.

That would provide for an opportunity to go on the public record with their concerns and to hear from the MLA as to what measures she can take to ensure their issues are resonating with the Premier and his cabinet.

As well, they could use that same option of a Council appearance to invite the upper tier of management with Northern Health to Prince Rupert to speak to the issues of the state of health care locally.

With any luck, the Councillors comments may make their way to the Northern Health Prince Rupert focused Facebook page, where local residents raise a number of concerns that at least gain some acknowledgement from health officials from time to time.

Regardless, with three years and more behind us on the same topic, the time for some actual progress on the list of concerns and answers to the many questions would seem long overdue.

More background on health care in the region can be found from our archive page here.