For Mayor Lee Brain, a Facebook salute to MLA Rice's success has become a focus group for the work ahead for both local politicians 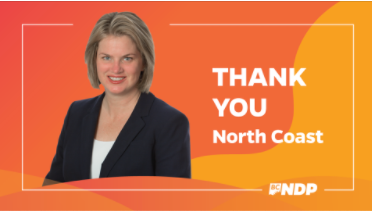 Like many on the North Coast, Prince Rupert Mayor Lee Brain has taken a moment to pass on congratulations to North Coast MLA elect Jennifer Rice, the incumbent NDP MLA set to start her third term of office and  her second time on the government side of the Legislature.

As we noted following Election Night on Saturday, Ms. Rice once again was returned to office taking a significant share of the vote in the 2020 snap pandemic election.

A noteworthy victory for the MLA,  even if this years election attracted less participants than most if not all Provincial elections previous.

In his salute from Election night, the Mayor made note of both the work that both Ms. Rice and Premier Horgan put in towards their re-election and the opportunity it presents to continue work on local projects and initiatives in the city.

And on that theme of getting to work, the Mayor's faithful followers on Facebook have weighed in, with the collective offering both commentary on the campaign and guidance for both Mr. Brain and Ms. Rice in areas of crime downtown, renewal of the downtown core and the desire for larger big box retail options for the community to name a few.

You can log on and review the 'to do' list here and maybe add a few of your own as well.

To look back at the 2020 Provincial election campaign see our archive notes here.

A wider overview of City Council themes can be explored here.