What once looked like an electoral rout, may yet be a battle down the homestretch

There may be some new energy found in the BC election campaign as this final week winds its way down to Saturday's voting day, that as a new poll from Angus Reid polling indicates that the Race for the Legislature is starting to tighten in these final days.

The report from the polling group issued last night notes that the BC NDP continue to hold a comfortable lead, but that some second thoughts may be percolating among the undecided voters as they weigh their options.

Premier John Horgan and his party jumped out to a significant lead from the the leaning and decided voters, as well as from those that noted that they participated in advanced voting opportunities.

But for those who have held back on their decision making, things are looking a little more interesting with the NDP holding a slim margin of advantage over the BC Liberals from those yet to cast a ballot. 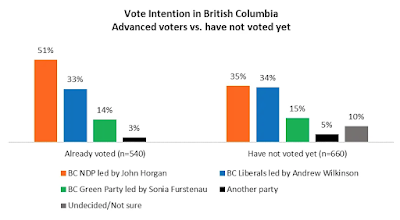 The pollsters noted that when it comes to what seems to be driving the voters in these final days of the campaign is a sense of ambivalence towards the province's political parties and their leaders.

A consistent theme running through the campaign has been a relative ambivalence towards the parties and their leaders. Indeed, while just under half (46%) of voters say they are motivated by a party and what it stands for, the other half (54%) are determined to block a party they don’t like instead. Among those who say they will vote for the BC Liberals this sentiment rises to seven-in-ten (71%).

So far, 45 percent of the British Columbians that were surveyed indicated that they had already voted either in an advance poll or by mail, 55% of those consulted for the poll had yet to cast a ballot.
And if British Columbians are looking for an indication as to which of the three main party leaders is resonating the best with the public, a gaze in the direction of Sonia Furstenau is in order.
Spurred on by her debate debut, the Green Leader has seen a spike of momentum her party, though how that translates into seats will be something to watch for on Election Night. 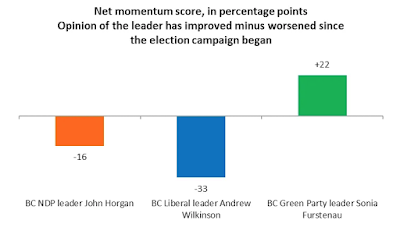 As for what is important to voters as they look to mark their ballots, the variables all depend on which party you support.
Curiously the Green supporters put the most importance on the individual candidate in their riding, followed by the Liberals, while NDP supporters don't seem to be too interested in who is carrying their flag, just as long that someone is ... 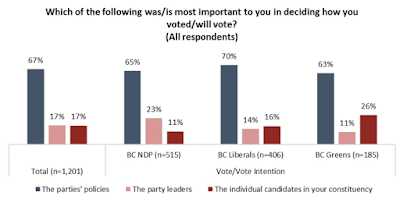 As for how British Columbians will want to see the political landscape come Saturday night, an NDP majority, or minority government makes for the most preferred of the options at 35% and 23% respectively, a Liberal majority or minority government would be the choice of 23% and 8% respectively.
The survey took place from October 16-19th which means that much of the consultation with would be voters took place as the fall out from Nathan Cullen's commentary related to BC North Coast Liberal Roy Jones Junior gained some momentum.
Considering how large a lead Premier Horgan and the NDP held heading into the weekend just passed, Mr. Horgan will no doubt be hoping that his candidates will refrain from similar themes and  similar political eruptions that could make for more NDP vote erosion leading up to Saturday.
You can review all of the data, the questionnaire and other background to the Angus Reid findings here.
For more notes related to the election race in the Northwest see our archive page here.
A wider overview of the provincial scene can be explored through our political blog D'Arcy McGee and our Victoria Viewpoints feature.
Posted by . at 9:14 AM