So far, much of the approach to the 2020 Provincial election campaign for North Coast incumbent Jennifer Rice has been to focus on the last few years of the NDP government, with a good portion of her campaign notes so far following the familiar narrative of government candidates that is found across the province.

And while the NDP MLA can deservedly take some bows on housing, the advocacy for grants for the City of Prince Rupert and some of the other social issues of the region, there are some areas where voters may want to hear more about what she could be doing for them in the months ahead from Saturday night if she's re-elected .

Missing so far has been any indication as to what areas that the NDP will want to focus on specifically for the North Coast.

Of particular note in this campaign, themes such as education and local health care have hardly been touched by the NDP candidate.

The hot topic of the last provincial election, that of the City's Middle School, a facility which is still unbuilt but making for some recent progress, has not even been mentioned thus far since the drop of the writ, nor for that matter has anything on education made it into the election discussion.

Another theme which has not seen  much discussion during the campaign is the quest to secure existing services and for the return or addition of others to the health offerings from Northern Health in Prince Rupert.

In transportation, while the Terrace area has seen some major transportation work take place in the last few years, the one major highway project near Prince Rupert that of the plans to remove the railway crossing at Mile 28 remains postponed, with few indications that it will be resuscitated anytime soon.

As well, while the NDP should get points for their work on returning some of the lost BC Ferry services to the community, as was pointed out in the recent election forums, there is still much work to be done on the transportation themes in the region and to this point there have been few indications that the concerns of voters have been taken note of.

So far the COVID election has made for an interesting comparison as to how the three candidates have approached the election, with Ms. Rice using her social media feed and a flyer campaign to mostly reinforce the political themes from a provincial overview.

The Facebook posts have mostly featured notes on the accomplishments of the Horgan government, mixed mainly with photos of Ms. Rice standing beside her election signs; the flyer making its way to our doors this week speaks mostly to the Provincial themes, along with a warning on how NDP views Liberal Leader Andrew Wilkinson's tax plans for the province. 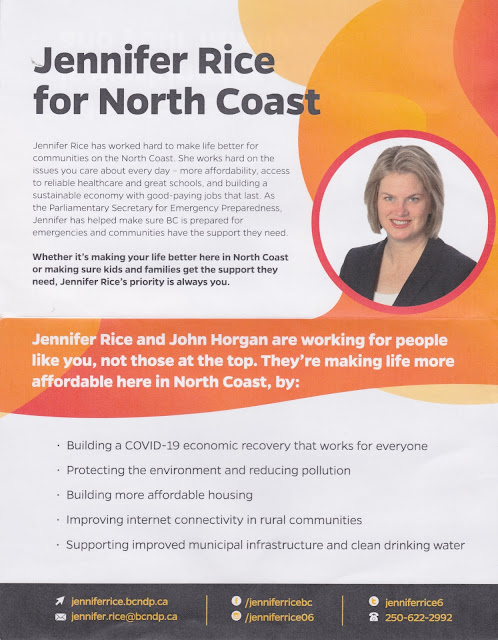 Missing however is much in the way of focus on the North Coast, Ms. Rice may want to take a few minutes to view the recent Virtual Open House from the Liberal candidate Roy Jones Junior, who used two hours on Sunday to examine the issues that people both in Prince Rupert and around the rest of the riding have been talking about and to offer up his take on what needs to be done.

In this strange campaign year, Mr. Jones so far, has made the best use of his Social media platform when it comes to talking issues with residents and catching some of the current of concern in the region.

His volume of content somewhat more instructive on local issues than that of Ms. Rice or Mr. Craven.

As it is in any campaign, for the most part the incumbent comes into a contest with a built in advantage and a perception that as the front runner, they are the one to beat.

That doesn't however mean that the front runner should be taking the decision of the voters for granted.

For more notes related to the 2020 campaign around the Northwest see our archive page here.