If the events of Thursday had happened in a primary class at any of the elementary schools at SD52, the teacher probably would have called for a time out!

The finger pointing was fast and furious on Thursday following a visit to the North Coast from Education Minister Mike Bernier, who was in Prince Rupert to discuss a range of issues with School District 52 officials.

One of the key items on the to do list for Thursday was a tour of Prince Rupert Middle School, the aging facility that served many years as the city's high school, prior to its shift in use with the creation of the 7-9 Middle school system a few years ago.

It was during that controversial rationalization of local elementary schools, that the carrot of a potential new school for the community was first proposed, though as the years have moved on the timeline seems no closer to delivering a new school today, than when PRMS accepted its first students in 2012.

As part of his visit to town, Mr. Bernier was taken on the tour of the school by School District 52 Superintendent Sandra Jones, who we imagine took him into every nook and cranny of the building to make note of the many documented deficiencies that it has, as well as to review the long running efforts from the School District to gain Ministry of Education action on the issue.

We made note of some of those efforts on March 9th when we outlined the latest approach by School District 52 to take the issue to the Ministry of Education.

Included in that review was a look at a recent letter from School District Chair Tina Last who charted much of the District's work on the topic, some of which began as far back as nine years ago.

For a bit more perspective on the long running issue for the community, at the bottom of our March 9th article is an archive of a number of stories we have posted on the theme, offering up some background to those past efforts dating all the way back to 2012.

You can review those notes here.

Once Minister Bernier's tour of PRMS was finished however, what followed became the domain of political theatre, featuring a few contributions from the politicians on hand that should raise a few eyebrows around the North Coast.

From the sidelines, residents of the region were treated to an exchange of thoughts that featured a healthy sample of the less than helpful political rhetoric that is frequently found in the Legislature.

In this case the usual Victoria bombast made its way out to the far reaches of the province, as Minister Bernier and MLA Rice took to their now well rehearsed talking points for the local media.

Our tour of the themes of the day start with a statement posted to North Coast Liberal candidate Herb Pond's Facebook page on Thursday.

In those comments, Minister Bernier seems to suggest that the school replacement issue gained no traction during his time as Minister, primarily because Jennifer Rice did not raise it personally with him over the last four years.

An interesting bit of washing of the hands on the topic, that leaves one to to wonder what former Education Minister Peter Fassbender and assorted Ministry officials did with all those files and correspondences on the issue that were received well before Mr. Bernier took over the office. 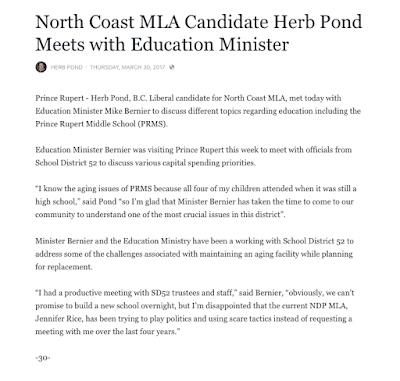 About the only thing that Mr. Bernier  did seem to get right in his statement for Mr. Pond's page, was the observation that North Coast MLA Jennifer Rice is a little late to the issue herself. With Ms. Rice having only made it a significant topic over the last few months and that in the prism of the lead up to what may be a very tight election race in the riding.

And, as though the days events and talking points couldn't get much more strange, in comments to local reporters (see links at bottom of page) Ms. Rice basically confirmed that concept of her lack of long term engagement on the issue.

As part of the storyline on PRMS, Ms. Rice suggests that she was only made aware of the need for a replacement school when it was recently brought to her attention by parents, stating that she didn't know the severity of the situation four years ago.

If so, it would seem that Ms. Rice is somewhat out of touch with her own riding, considering the issue of a replacement school for the School District has been a frequent topic and one found in the work of any number of media sources in the community for almost a decade now.

As part of her review and focus on the day's events, the NDP MLA weighed in further through her Facebook page, expressing her disappointment that an anticipated announcement of commitment for a new school was not delivered by the Minister. 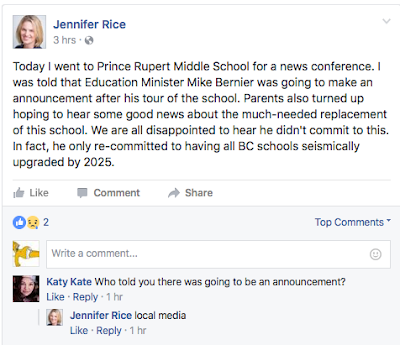 Why the MLA was of the belief that some form of an announcement was to be made is a bit of mystery though, as there had been no real indication from the government side that the Minister was coming to town ready to commit to anything.

During a March exchange in the Legislature between Ms. Rice and the Minister, Mr. Bernier advised her of his plan to tour the School District to look at the issues that are being faced. Though, nowhere during the course of those comments did he make mention of coming here to deliver any kind of a decision.

In a response to a question on that theme from her Facebook page, Ms. Rice states that it was the local media that apparently alerted her to the prospect of an announcement.

However, if one takes a quick scan of any of the stories from the region's media options since Mr. Bernier announced his trip on March 15th, none seem to offer up any indication that any major announcement was to  be expected as part of Thursday's tour.

Not to be left out of this political cycle of spin, are the thoughts from Liberal candidate Herb Pond, who appeared to be more than content to let Mr. Bernier deliver the heavy rhetorical artillery on his NDP opponent.

Other than by way of a few comments since he launched his campaign in January that acknowledged the PRMS issue, the Liberal candidate has not exactly been issuing any clarion calls, or leading the charge to advocate for a replacement for the building.

For Thursday's contribution to the conversation on education, Mr. Pond noted that all of his children had attended the school when it served as a High School, so at least he might have more first hand familiarity than Ms. Rice, when it comes to the conditions the building faced then and continue to face today.

Through his comments however, Mr. Pond also appears to be onboard with the Liberal government's current approach to the issue, offering up that the Minister has been engaged with School District officials to maintain an aging facility, while exploring plans to replace it.

Those comments do seem to suggest that the Minister is a little more aware of the long standing issues with the building, than the evolving narrative of the day appears to have been designed to provide for.

The main takeaway from it all is the prospect of the school replacement issue becoming the political cudgel of the campaign, one where the candidates hammer away from set storylines steeped more in scoring points at the moment, than addressing what should be the main focus.

And while the need to replace a failing structure may be obvious for most of those living in Prince Rupert, for anyone looking for some fast action on the need for a replacement school, disappointment would seem to be looming large at the moment.

With Mr. Bernier speaking mostly of addressing seismic issues for the short term and offering little indication that any replacement decision is near. The road ahead points to the need for the community to keep the spotlight on the issue and continue to put pressure on the government, regardless of whichever party should win the May vote.

Considering the long running nature of this issue and the range of reports and studies that have been submitted to the government, the unfortunate thing about all of this is, that progress really should have been made long before now.

The process of replacing a structure that has outlived its usefulness really shouldn't end up as the talking point of a political campaign; something that makes the education of students (anyone remember them?) in the community just another piece of the political chessboard.

Any project of such importance to students, parents and those that work for the School District, or live in the larger community, should be reviewed purely on need and left far beyond the realm of partisan politics.

However, that being said, the optics of Thursday would seem to serve to offer a guide for us as to how we apparently should view the debate.

Leaving those with the desire to see the province take action on the replacement issue, to do some fortune telling as to how the May 9th election campaign will turn out.

With voters on the North Coast looking to determine how best to cast a vote on May 9th towards the party that they believe will form the next government.

All with the hopeful wish that we see some satisfaction on the replacement issue and receive a measure of respect from our elected officials for what has been a very, very patient community.

The local reviews of Thursday's tour can be found below:

For more items on education (and a fairly healthy amount of background on the PRMS story) see our Archive page here.