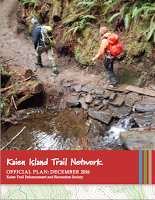 The Rotary Club has added its name to a recently announced plan to redevelop a portion of the Rushbrook Trail, joining forces with the Kaien Island Trail Enhancement and Recreation Society to bring back to life the once popular walking area on the city's east side.

The project most recently was celebrated by the City, as it announced the details of a leasing arrangement with the Trail Society which once completed would see the trail reopened for public use for the first time since 2003.

Progress was seen last week on the initiative, with the announcement of a contract tender process now in motion to solicit bids for construction of 800 metres of trail adjacent to the existing railroad tracks which have been decommissioned.

Requests for tender packages or any inquires related to the contract tender process are to be directed to Sean Carlson at pscarlson@mcelhanney.com or at 250-631-4027.

The deadline for submissions is Friday March 31st at 2PM.

The Rotary Club joining forces with the Trail Enhancement and Recreation Society heralds a return to a project that Rotarians have long had an interest in.

The organization has explored the prospects of bringing the Rushbrook trail back a number of times over the years, with the last big push for the project coming ten years ago.

The Rotary efforts on the Trail plan, past and present, were reinforced during a February membership event which featured a presentation from Mayor Lee Brain.


There is to this point however, no indication from the Rotary website or Facebook page as to what their involvement in the project will be and how they plan to work with the Trail Enhancement Society as the project moves forward.

Mention of the decommissioned railway tracks as part of the contract bid does serve to remind us, that to this point there has been no comment from CN Rail about the proposal and what opinion they may have on the launch of the work, and what, if any impact that it may have on the status of the rail line for the future.

As for the project planning, once the tenders are received the bids will be reviewed and a decision will be made as to which one offers up the best results for the Trail ambitions.

No timeline has bee outlined for the project work, but in their February media release the Kaien Island Trail Enhancement and Recreation Society indicated that the project would start this spring and be completed sometime within the year.

More background on the plans for the Rushbrook Trail can be found on our archive page.