Parking around the Canadian Fish Plant along George Hills Way is getting a little cramped these days as a fleet of transport trucks wait their turn to collect shipments of herring and herring roe for transit to the Lower mainland and on to Asia.

The North Coast herring season is making the turn into the home stretch as March makes its way into April, the number of landings becoming fewer and fewer at the giant fish plant on the city's eastern side.

The harvest from the waters of the North and Central coast will now be destined to make their way to Vancouver and for eventual shipment to Asian markets.

With the British Columbia product considered to be as one of near gold status in the fishing industry, particularly when it comes to the herring roe, a resource that is in high demand.


The herring season offers up a few extra hours for those at the high end of the labour pool board at the Prince Rupert plant, valuable for those that need as many hours as possible to qualify for Employment insurance in the fall.

Once the herring season winds down completely in early May, the plant will transform itself for salmon season, though that is a season which looks quite different than what was seen less than a few years ago when salmon canning operations were in place in Prince Rupert.

Recent changes to the George Hills Way plant have seen the canning lines removed and the amount of work for local shore workers decline as the plant shifts towards more of a fresh and frozen operation.

2017 will also be what is known as a contract year for the local workers at the two Canadian fish plant facilities in the community.

To prepare for those negotiations ahead, UFAWU-Unifor the union representing the workers recently held some preliminary meetings with the workers, as the union leadership looked to get an idea as to what the workers are seeking at the negotiating table this time around.

The current labour agreement between workers and the Canadian Fish Company will expire on April 15th, it's unknown as to when the first of the bargaining sessions will take place. 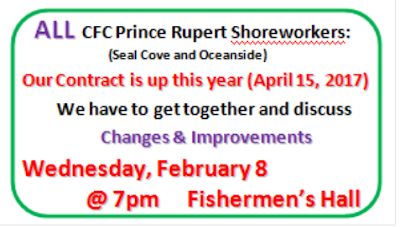 UFAWU-Unifor has made the concentration of ownership of the industry on the North Coast a key element of their response to the job declines at the Prince Rupert plant, calling for the Federal government to address the issue of adjacency for the fishing industry in British Columbia.

That is a call that has been echoed by both NDP MP Nathan Cullen, it was also topic that was raised in the Legislature earlier this month by NDP MLA Jennifer Rice.

In addition to the labour discussions, the 2017 fishing season is facing potential concerns over fish stock levels, with DFO noting this month that early returns are not offering a promising outlook for the fishing season ahead.

At the moment, it is still too early in the year to make a final decision as to whether there will be a salmon season, those determinations will come in the months to come, as the Federal fisheries department releases its salmon management plan for the year.

For more notes on the Fishing industry in British Columbia see our archive page here.
Posted by . at 8:45 AM