While the Help Wanted signs may be going up across Northern British Columbia, the quest for teachers to fill the sudden appearance of new positions is providing a major challenge for many School Districts in rural British Columbia.

As we noted on the blog in January, one of the side swiping effects of the recent agreement between the BCTF and the Province of British Columbia is the start of a teacher drain from the North, that as more and more opportunities become available in the larger communities of the Okanagan, Vancouver Island and Lower Mainland regions.

The situation is developing into an item of concern, for School Districts from Prince George to Prince Rupert and with communities along the highway 16 corridor. With school administrators having to take a number of paths towards providing for staff for the growing number of open positions.

Yesterday we reviewed how the theme was addressed at the March 7th School District 52 Board meeting, with the SD52 officials making note of the issue of teacher recruitment and throwing its support behind two motions at the Annual General Meeting of the British Columbia Public Schools Employer's Association and at the the Provincial Council meeting of the British Columbia Trustees Association.

In both cases the School District is joining others in looking to obtain some assistance when it comes to the recruitment of teachers to rural districts.

The challenges of that recruitment process and what the School District's are looking for were the theme of a recent letter by the School Trustees Association to Mike Bernier, the Minster of Education, with the main theme of the issues facing rural Districts expressed in one paragraph of the two page correspondence.

The reality is that they will have a more difficult time attracting and keeping the teachers they need to provide the programs students want and deserve. It is also not just a question of sheer numbers. Districts and schools in rural areas must be able to recruit and retain teachers with the qualifications and experience needed to teach senior sciences, languages, math and technologies. Unless measures are quickly put in place, we will see a significant negative impact on the ability of these school districts and schools to offer the same programming as in more urban communities.

You can review the full letter to the Minister below: 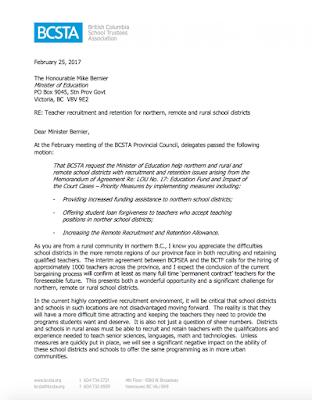 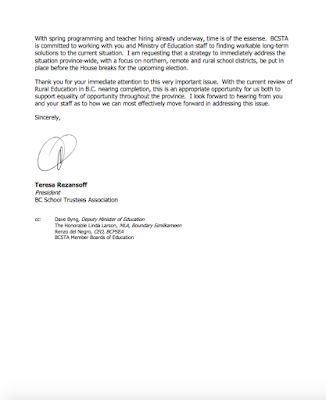 Currently School District 52 has a job posting listed with the Make A Future website, which notes that there are Teacher on Call positions available for multiple schools in the District.

For more items related to the topic and other issues of note for education in the Northwest see our archive page here.

Email ThisBlogThis!Share to TwitterShare to FacebookShare to Pinterest
Labels: SD52 and hiring issues