As they did for the Pacific NorthWest LNG assessment process back in April of 2016, the City of Prince Rupert has contributed to the comment process for the proposed LNG Terminal at Digby Island, submitting a four page letter offering up the city's observations on the impact of Aurora project.

In the letter submitted on March 7th, 2017, Mayor Lee Brain signs off on the correspondence, noting that City Staff has reviewed the Aurora LNG application for an Environmental Assessment Certificate.

As part of their documentation towards the process, the city delivers several comments and requests for consideration by the BC Assessment Office.

The City's focus for the proposed development was noted in Five categories, with the City taking review of the mitigation notes from Aurora LNG and offering up some of their concerns from the following areas:

The City of Prince Rupert offered up some objections to the conclusions on air quality that the Aurora information had reached. From their review the City stated that they are of the opinion that a more thorough explanation of the proponent's methodology is required before the figures that Aurora presented can be accepted.

The City also disagreed with Aurora's characterization of the impact of air quality exceedances as a result of cumulative effects, noting that the City did not find the proponents proposed mitigations to be adequate.

The impact of the Aurora proposal on local infrastructure also made for a theme for the City, noting such areas as the increased in shared policing costs due to project-related population increases, the purchase of new fire suppression and rescue equipment for the Prince Rupert Airport owing to increased passenger levels, as well as the impact on road repair costs in the community as a result of increased traffic volumes on a road network that the city describes as already in poor condition.

As part of their notes on the theme of roads, the City noted that as part of their mitigations, Aurora should include a commitment to bear those costs which are directly attributable to their activities.

Also in their infrastructure notes, are concerns over the nature of the emergency boil off gas flare requirements that the project will require at Digby Island, with the City noting that any plume generated would impinge on the take off and landing corridor for aircraft arriving and departing from the Prince Rupert airport.  The city suggests that Aurora be required to examine alternative placements and configurations that would not have significant negative impacts on flight activity in these regularly used transportation corridors.

Adding that avoiding interference with all regular flight operations be required as a condition of approval for the application.

The city's ongoing concerns related to housing issues in the community also gains a significant share of their attention in the submission to the EAO process.

With the City of Prince Rupert observing that they do not have confidence in the proponent's assessment of the likely effects of their project on housing demand in the Local Assessment Area.

As part of their review of the Aurora data, the City notes that they strongly suggest that the proponent make firm commitments for the mitigation of housing effects attributable to their approval. That would include commitments to build affordable housing for those displaced by increased prices and lower availability in the housing market, as well as providing financial support for local organizations providing housing and support services to homeless and displaced people.

The City also had a range of notes related to the economic impact of the large scale development and how the company could best address concerns in the community.

While noting that the addition of new industry to the local area is welcomed by the City, the letter to the EAO notes that the economic benefits achieved from the project must not come at the expense of local businesses and residents.  In their submission the city observes as to how the arrival of the project might result in a labour drain from local business owners, as residents seek potentially higher paying work with the LNG terminal project, the city delivering its concerns over the potential of financial loss or closure as a result for local businesses.

The City states in their submission that the proponent's suggested mitigations to address the issue are insufficient in the City's view and have the potential to result in long-term negative impacts to the economic diversity of the City. From that, the City recommends that the proponent be required to measure their effect on the local business environment during construction, and commit to re-investing in local businesses over the course of operations to counteract any negative affects from economic shock.

To address some of the City's concerns related to the impact on health to residents of the community, the City's submission calls on the current popularity of the concept of Social Licence.

With the Prince Rupert correspondence noting that for any industrial project to be granted the social licence to operate in a community, they must commit to at the very least maintaining if not improving the community's health and well being.

When it comes to the Aurora project, the City is strongly suggesting that the proponent be required to measure and monitor the baseline measures of health they have identified prior to construction start and commit to maintain or improve those measures over the lifetime of their operations.


More expansive background on the notes above can be found from the four page document which can be reviewed below:   (click to expand) 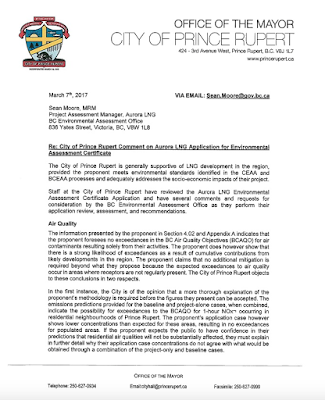 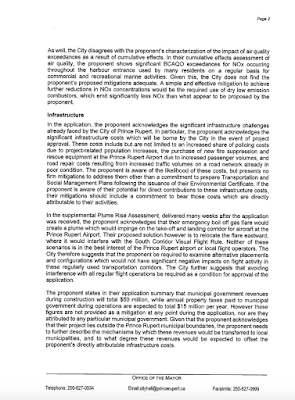 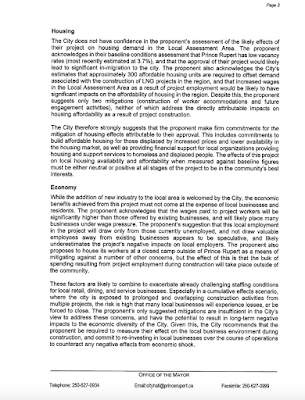 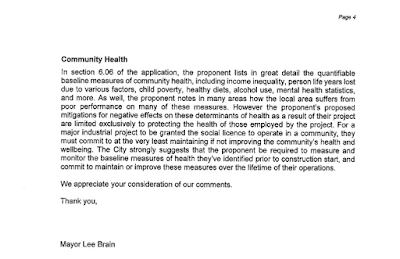 The City of Prince Rupert submission is among a lengthy list of submissions, dating from January 16 when the process opened and running until March 9th, the date that the call for submissions came to a close.

A significant level of contributions to that call came from residents of the Dodge Cove area, with a number of residents of Prince Rupert also providing their comments as part of the process.

Those numbers need to be reviewed in the context of the larger number of submissions to the contribution period which come from a rather diverse geographic reach, with comments delivered from as far away as Australia, Slovenia and Spain to name a few destinations, along with  a large volume of contributors from British Columbia, Canada and the United States

Also a key element when it comes to the the contributions to the process, is what appears to be a concentrated letter writing process conducted by environmental organizations, with a number of the correspondences noting that the letters have been created through an automatic letter writing program.

That leaves it up to the BC environmental office to weigh through the page after page of contributions to separate those with local concerns against the larger ongoing letter writing campaign that marks any major development in Canada.

The local letters offer up testimony as to how lives may be impacted at Dodge Cove, or for residents across the harbour in Prince Rupert, with those both pro and against the proposed terminal making their views clear.

Along with the local contributions, a number of residents of Fort Nelson, where the natural gas would be accessed before its journey to the North Coast have also participated in the process offering the perspective of those living in that area of BC,  providing their views on how the project would bring much needed economic development for their community.

The scope of the submissions range from short commentaries of emotional attachment to Dodge Cove, to page after page of expansive reviews related to any LNG development anywhere, many of them complete with footnotes.

A number of those submissions include charts and photos to provide a visual approach to go along with the written commentary.

With the Comment period now closed, the provincial Environmental office enters the review period for the application for an Environmental Certificate, with provincial officials now tasked to review the full scope of the comments, as well as the results of a range of submissions from the company.

From those submissions the EAO will determine if Aurora LNG will be allowed to move forward to the next phase of their proposed development, or if it becomes another study of abandoned projects for a bookshelf at the public library.

No timeline is noted as to when that decision will be provided by the provincial office.

For more background on the Aurora LNG project see our archive page here.
Posted by . at 9:04 AM