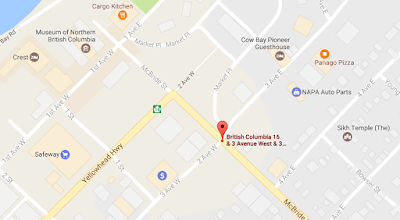 The days of having to work on your four way stop protocol in the downtown area may soon be at an end, as work resumes on the project to replace the damaged traffic light at the corner of McBride and Third Avenue West.

It's been a topic of conversation around the city for months, as residents wondered when the light which was put out of commission in the fall of last year would finally be returned to service.

The delay in replacing the damaged traffic signal has made for a frequent topic for City Council sessions in recent months, the answer was always much the same of the Ministry of Transportation was assessing the issue, waiting for parts and looking at how to replace the light.

The location has proven to be a bit of a challenge, mainly owing to the nature of the lot beside the lot beside the intersection, with Transportation officials having to call in engineers to seek the best option when it comes to reinstallation of the light.

Workers from Prince Rupert based Marcan construction are currently working on the site, preparing the area for the process of re-installation.

The recent winter weather also worked against a timely solution, though with the recent shift in temperatures and melt of snow the crews returned earlier this week to address the issue.

With work now underway, the City has made note of some traffic changes in the immediate area.

The traffic lane that heads east down Third Avenue towards Cowy Bay has now been closed to Traffic, with Drivers heading towards that area of town being rerouted down McBride to 1st Avenue East.

The timeline for the current construction work is expected to take two weeks.

Traffic flow in that area is also being affected by the city's own work in front of the old Dairy Queen building, where right hand turns travelling up Third Avenue West into the downtown core are also forbidden.

You can review the City's traffic advisory here.
Posted by . at 9:27 AM