The Prince Rupert Seawolves gave it a good long run, but in the end a nemesis from earlier in the week once again had the better of the North Coast representatives, as the North Okanagan Knights topped the Prince Rupert squad by a score of 7 to 2 in the Tier 4 Peewee Tournament final.

The Seawolves who claim Silver from the competition, had a successful run through the five days of tournament play, suffering only one loss through the schedule a Monday defeat to the eventual champs.

Other than that early setback, the Peewee squad compiled an impressive record of Four wins, one loss and one tie for their six tournament games, the nine points taking them to second place at the end of the preliminary round, setting the stage for Thursday nights final.

The strength and depth of the Okanagan team was once again the factor in the final match up of the week, though the Seawolves clearly had regrouped from their Monday match up, offering up a strong challenge to the champs.

However, in the end it was experience and access to more competition that perhaps offered up the one intangible that the Rupert squad had to face.

The Okanagan program and larger population base of the region offers the Knights a bit of an advantage when it comes to tournament time and ability to bring in a championship in the winner take all final.

Tournament officials have not released any scoring summaries to this point from the final game, or from the week of play in Fernie.

The North Okanagan team finished the tournament undefeated, the final standings from the 2017 Championship can be found below: 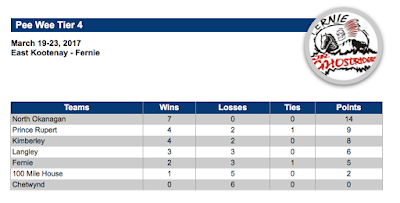 You can explore the results and other notes from the tournament week from our review page here.

For more items of interest related to Minor hockey in the Northwest see our archive page here.
Posted by . at 11:13 AM

Email ThisBlogThis!Share to TwitterShare to FacebookShare to Pinterest
Labels: Seawolves at provincials