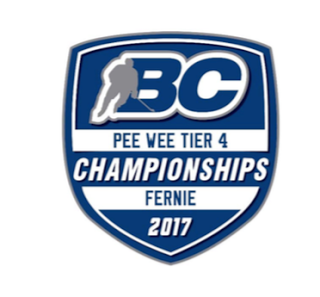 The final game for the 2017 Tier 4 Provincial Peewee Hockey Championship is set for tonight and the North Coast will have some rooting interest in how that game turns out, as the Prince Rupert Seawolves prepare to take to the ice against North Okanagan.

The Seawolves rode a record of four wins, one tie and one loss to a second place spot in the table of seven from tournament week, the most recent victory coming this morning with a 4-0 shut out over Kimberly.

As the tournament moved on through to today, the results snuffed out any challenge for the second place spot setting the match up for tonight at 6:15.

It makes for a one game winner take all finale for tournament week in Fernie, with the Seawolves facing off against the only team that defeated them over the six games since Sunday.

On Monday, the North Okanagan team got the better of the Prince Rupert side with a 9 to 4 victory, something that might make for a bit of motivation for the Seawolves as they look to take one back and with it a BC championship.

Those interested in following the play from tonight's final can subscribe to a Pay Per View broadcast here, the cost is eight dollars, more details on how to access that streamcast can be reviewed here.

You can review the path to the championship match up from our anchor page here.