CFNR expansion ambitions to be heard by CRTC on Monday 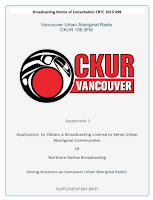 Terrace based CFNR has an ambitious expansion plan in mind, as the First Nations based broadcaster looks to increase its presence in the radio industry by introducing their programming sound through a new Vancouver radio station.

CFNR will appear in front of a CRTC application board on Monday, presenting their case as part of their application for an English and Aboriginal Type B Native FM radio station in Vancouver broadcasting at 106.3 on the FM band.

If successful the station would operate under the call letters of CKUR Vancouver, Identified as Vancouver Urban Aboriginal Radio.

The application calls for a music based service which would broadcast 126 hours of local programming each broadcast week, with programming to be presented in English, Salishan, Coast Salish and Halkomelem language.


The application documents that have been submitted for Monday's hearing include a Market Survey Report, which explores the nature of the Vancouver market and a breakdown of the registered First Nations population that are found in the Greater Vancouver region, as well as a profile of those Nations that the station would be seeking to provide services for.

A review of how the station would offer up community support to the Vancouver area is also provided, along with an explanation as to how the CFNR Board functions and what plans the station would have to add to it should they be successful with their application.

The collection of documents also includes a number of Question and Response correspondences, where the radio station has addressed items of note from the regulator.

A map that is included as part of the application shows the range that the proposed CKUR signal would travel, centred in the immediate Vancouver area, expanding largely in directions to the West, East and South.

Pockets of the signal would reach into the northern part of Washington State while the Mid Island, coastal region of Vancouver Island would also be on the fringe of the radio station signal. 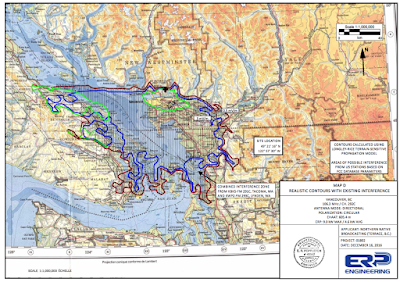 You can download the full application through the CRTC website here, the CFNR application is number four, click on the Application Number 2016-0013-0 to review their presentation.

The application and six other applications from across Canada, will be heard in Gatineau, Quebec on Monday starting at 6AM Pacific time.

One of those other applicants, First Peoples Radio based out of Winnipeg, is also seeking a broadcast licence for Vancouver, one of five licences that group is seeking as part of a proposed radio network.

The complete listings for Monday's hearing can be reviewed here.

The applicants will not be granted their licences as part of the hearing process, any approval will come later in the year when the CRTC has reviewed the applications and then announce their decision.

For those that have an interest in how the process takes place, the hearing will be streamed live through the CRTC website, once the hearing is underway the link to the proceedings will be made available at the bottom of their home page.

For more items related to the media on the North Coast see our archive page here.