With another cancellation, City Council frees up your Monday evening for you ...


If you're the type of engaged citizen of Prince Rupert that is inclined to follow along with our elected officials as they discuss such things as tax increases, infrastructure plans and a bevy of visionary ideas for the future, then you can take this coming Monday night off.

A notice posted to the City Website on Tuesday outlines that the regularly scheduled City Council Session for Monday April 3rd has been cancelled.

And despite the many options for communication that the City has put in place over the last two years, no details are to be found anywhere, from the City website to the Facebook pages, or twitter feeds, that might explain as to why the regular council session that is available for public overview has been taken off the schedule. 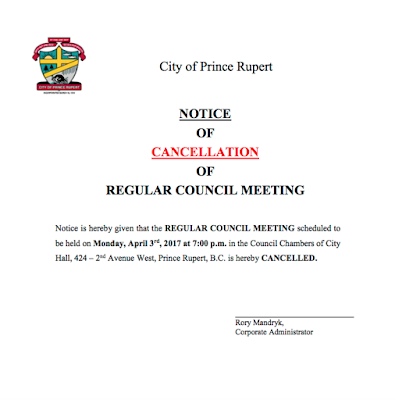 Interestingly enough the City website also advises that, while the Public session is cancelled; the Closed session, that would be the one not available for public viewing will go ahead as planned at Five PM on Monday. 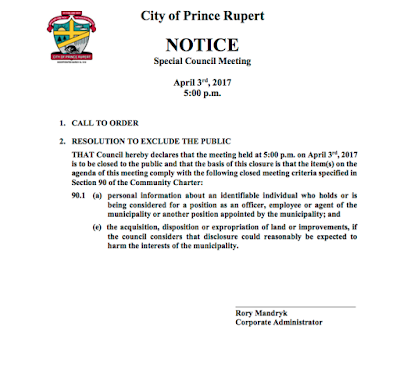 The decision by Council members to take the night off however, does raise a question as to when does a special instance, start to become a trend?

The cancellation of Monday's Regular Public Council session marks the second time so far this year that our City Councillors have chosen to call off a meeting.

The first cancellation came in January, when they took the January 23rd session off, citing  the number of Agenda items that the City was unable to finalize prior to the meeting.

Lost in that instance, was the public comment period that comes with the monthly Committee of the Whole process that marks the last meeting of the month. That segment of the monthly session is one of the few opportunities the public has to address Council in a public forum to ask questions or raise concerns.

It's somewhat puzzling that with the many issues that could be available for public discussion by City Council, that they are tossing aside the regular council sessions at the same kind of pace as a teenager changes their social calendar at the last moment.

Earlier this year, Councillor Cunningham offered up the suggestion that Council should be asking for more presentations from civic departments and other areas of interest to the public,  something that once made up part of Council proceedings and an element that would be a welcome addition to the process for the public meetings.

Though, one imagines that if they keep knocking the meetings off the calendar, that Mr. Cunningham's theme may never see the light of day.

It's not like the Council members are overworked to this point of the year.

During the five public sessions that they have held so far this year, the majority have finished in less than forty two minutes, the published Agendas listing only a few items to review, while council members have offered up little in the way of topics for further review or discussion once they are in front of the cameras of the City Hall chamber.

The City's council members also hosted a Public Budget Consultation session on March 15th, an event that featured low attendance from the public and lasted all of thirty six minutes.

As it is, in recent years the schedule of meetings has been one of a slow march of reduction, long gone are the days of Council meeting twice a month, a process that once delivered for a total of 24 public opportunities to view the mechanics of civic government.

This year for instance the "scheduled" sessions number at but 20 (and declining fast), with Council only meeting once a month in July, August, September and December.

The reduced amount of time in public session certainly makes for an interesting approach to the concept of openness and transparency, that ever popular theme that most of the current council proclaimed their devotion to during the 2014 Council election.

The brevity of those sessions that they do hold, has also delivered a bit of a trend where there is little in the way of discussion and more in the way of Announcements of late.

For the most part now, what we get is a Council that relays the list of some of the work that they have apparently been addressing outside of the public sessions, with little explanation provided as to how they reached their decisions.

At this current pace of cancellation, the gap between the Closed sessions and the Open and public ones, is something that is certainly starting to shift in the wrong direction. 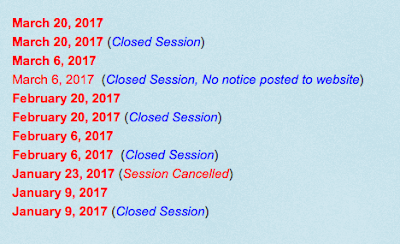 Considering this percolating approach of ripping up the calendar, the city's residents might want to give some thought to changing the way that we approach pay for Council members, perhaps considering payment on a per meeting basis, rather than with a monthly stipend.

Should Council keep to this trend of cancelling off the public sessions, we might be able to save enough money that we wouldn't have pay that 1.5 percent tax increase that Council is on the cusp of approving.

Then again if they continue to keep closing the doors to open sessions, one wonders if we should have to pay it at all.

For more items related to City Council issues see our archive page here.
Posted by . at 9:40 AM