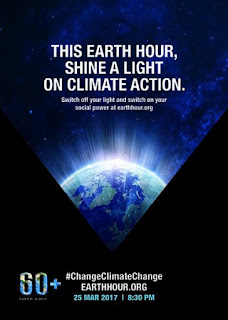 Can Earth Hour get its mojo back?

That's a question for the environmental movement tonight as the annual call to power down arrives this evening between 8:30 and 9:30 PM.

A few short years ago, the lights were being switched of with enthusiasm around the world, the global event having caught the imagination of the public thanks to its novelty and a pretty good advertising push.

And while many locations across the continents continue to expand on their efforts, others are starting to drift off when it comes to engagement to the theme

As the project heads into its 11th year of observation in British Columbia, the participation trend has been delivering mixed results in the Northwest over recent years.

In 2015 Prince Rupert and Port Edward had recorded energy savings on Earth Hour of 2.3 Percent.

Two years previous, in 2013, the two communities had delivered energy savings of 4.1 percent

Some notes on past Prince Rupert observations of the hour can be found below:

2016 -- Organizers hoping for a boost in Earth Hour participation levels for 2016
2014 -- Earth Hour 2014 and its hour of powering down arrives tonight
2013 -- Rupertites prepare to power down for an hour, as Earth Hour approaches
2012 -- Prince Rupert trends middle of the pack in Earth Hour involvement

Launched in Australia in 2007, the program hosted by the World Wildlife Fund was created to raise awareness of the effects of climate change, the project has used some of the world's major attractions as a symbol of awareness, with such locations as the Eiffel Tower in Paris, Empire State Building in New York and Sydney Opera House extinguishing their lighting systems to help spread the word.

Across Canada public and private buildings and attractions have shared in that message, Niagara Falls shuts off the lights for the hour, while in British Columbia, the decorative lights that frame the Legislature in Victoria go dark.

The Province of British Columbia took note of Earth Hour on Thursday, outlining what measures it was taking for the hour and offering links to the WWF efforts and the province's Climate Leadership plan.

However, heading into today and with less than ten hours to go, there was still no reminder this year from the City of Prince Rupert, with no mentions of Earth Hour or background notes offered through the city website or the social media sites of Facebook and Twitter that they offer to the public.

The theme has even managed to fly under the radar of Mayor Lee Brain, who has noted his strong commitment to the environment in the past.

So far, neither his twitter feed, or Facebook page which is a frequently used social media stream that makes mention of many local initiatives, has yet to deliver the call to action for those who follow the page.

Even the very pro-environment MLA for the region, recently endorsed by an environmental group, has missed the chance to urge for energy conservation, with no mentions of Earth Hour yet for Jennifer Rice's Facebook page or twitter feed.

Also making for an interesting note on the theme of dwindling interest, the push for participation in Earth Hour seems to have slipped by the province's energy provider BC Hydro, with no mention listed on their website highlighting tonight's request to power down.

The host organizer of the project however is keeping the faith, with the WWF website featuring a number of items of note.

You can review more from the WWF about tonight's plans here.

The WWF also has what it calls a Starter kit, offering up options for social media involvement and other ways to share word of the hour dedicated to powering down.

The WWF has put up a number of videos to set the tone for tonight's efforts, providing background on the issue of climate change and a look at events from past years.