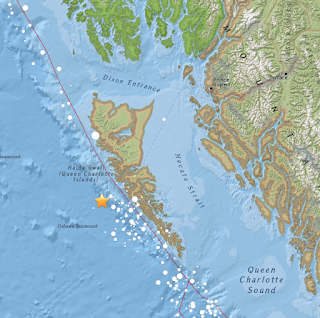 A moderate sized earthquake has been recorded just west of Haida Gwaii, the 4.2 magnitude seismic event took place at 10:59 it was centred 148 km South Southwest of Masset

It had a recorded depth of 1 kilometre.

No Tsunami Warning has been generated as a result of this event.

Mayor Andrew Merilees advised the North Coast Review that the temblor had not been noticed in the Masset area.

So far there has been no indication from Southern Haida Gwaii as to whether the event had any effect on residents in that region.

Quakes of similar magnitude have been recorded off of Vancouver Island north on the Alaskan panhandle in recent weeks.

More items related to seismic events on the North Pacific coast can be found here.