Shifting the location of the annual City of Prince Rupert Budget Consultation process seems like it was a wise move by City Council, as Council perhaps looking at the participation levels of the past, chose to hold this years consultation in the more familiar confines of City hall.

Even that relocation from the Lester Centre to City Hall chambers offered up lots of room to sit for those in attendance, as only two members of the public took advantage of the public meeting on Wednesday night, something which made for a fairly quick review of how the City is approaching its financial planning for the year ahead.

As we noted in our blog item prior to the Budget session, the City's CFO had delivered the first look to the budget last week at Council, making note of the need for an increase in the mill rate on property taxation to address some increased costs for the City this year.

Wednesday's session opened up with the City's Financial Officer Corrine Bomben, introducing a pair of videos for review, the first a Highlight reel of civic accomplishment over the last year, the second a tutorial on how the city's property taxation process works.

The highlight reel featured a look at a number of recent civic works projects on bridges, retaining walls and sewers and such, as well as the Mayor at a ReDesign Rupert session and other community events.  Notes on recent provincial announcements from the province related to housing and funding agreements with  organizations were featured during the two minutes. As well, the launch of the city's water supply project, the opening of the Cow Bay Dock and work at Watson Island among other items, made for the content of the visual celebration.

Following the short video interlude, Ms. Bomben then provided a shortened version of the Budget presentation that she made to Council last week, picking out selected items from that overview to share with the two residents in Chamber and anyone viewing at home through Cable Ten or by way of the city's video feed.

Ms. Bomben's presentation focused for the most part on the Budget requirements and the need to address a deficit of 160,000 dollars, with a plan to recommend an increase of 1.5 percent to the mill rate on the city's taxation process.

How that rate increase may affect local taxpayers was also part of the CFO's overview with Ms. Bomben providing a look at some charts on the theme, one which noted how the tax bill may change should Council approve the 1.5 per cent increase. 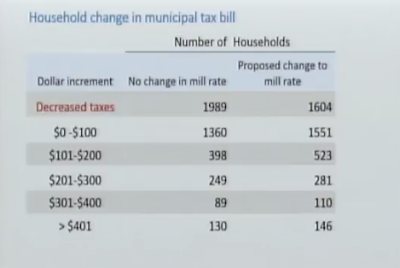 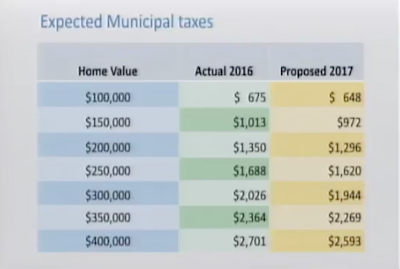 A breakdown on the cost of some of the civic services that are provided for residents also made for part of the review,  with the top five areas of civic expenditure found in the following areas:

Ms. Bomben noted that those five categories make up sixty seven percent of all of the Civic Spending.

Also included in the chart offered up for review, but not mentioned as part of the presentation, were the three categories related to the delivery of civic government with Governance, Corporate Administration and Finance accounting for 12% of the expenditures presented. 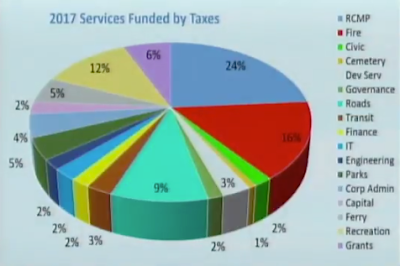 The theme of how the City makes use of the Legacy Incorporated Fund was also explained for the audience, with Ms. Bomben outlining how the City has used the Fund in the last year and what contribution it makes to the budget plan.

From her presentation it was noted that the Fund would contribute 7.389 million this year to the city's financial planning, with 1.3 million set to be used for economic growth, though there was no breakdown provided as to how that money would be allocated towards those initiatives.

The remaining 6.089 million is to be used towards capital funding for the year. 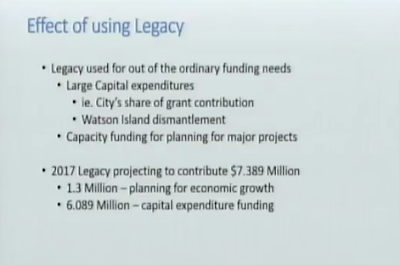 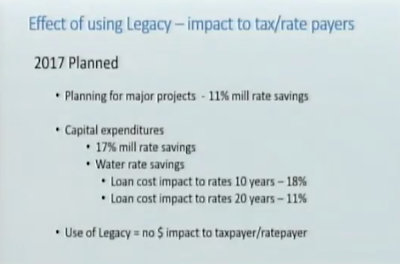 Ms. Bomben also provided the city's answer to the annual question of why they don't use the Legacy Fund to reduce the city's taxation burden on residents and provide the resources for the budget shortfall from the fund, with the CFO noting that to do so would have dire results.

Using a hypothetical example of how using the fund to keep the Mill rate at zero until the fund is exhausted, would see the fund depleted within eight years. Something, the CFO observed that would leave a significant burden for residents as the fund is drawn down, with Ms. Bomben suggesting that would  not be reasonable or understandable for taxpayers.

She noted that the current method of making small increases to fund operational costs results in smoother rate changes and keeps pace with normal operational increases such as contractual and statutory obligations and normal increases to costs, supplies and services. 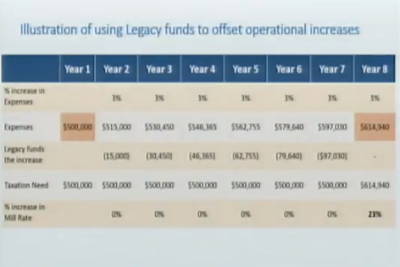 To bring the budget overview to an end, Ms. Bomben outlined some of the challenges faced by the city when it comes to tax caps on industrial lands in the region, as well as how residents can access resources to reduce the tax burden that they may face.

As for the public comment period, with an advisory from the Mayor at the start of the night that Council members would not respond to any questions posed by those participating, the evening did not provide for a chance to ask Council members about elements of the budget process.

Instead, for the most part it was to be used to ask questions of staff, or offer up general comments related to the presentation.

Only one member of the two residents in the gallery took to the microphone, with Larry Golden a frequent observer of City Council proceedings offering up some thoughts on how the Legacy Fund is used and suggesting that in order to make consideration of the budget plan meaningful, that the City should provide some further financial background on that fund prior to the March 20th Council meeting.

The City also conducted an online polling opportunity during the presentation, selecting three questions for the public to consider.

Though a review of the nature and wording of the questions, would seem to indicate that three polls were created to deliver the answer that Council wished to receive, that of an endorsement of sorts towards their current approach on the topics presented.

The three questions and their results are as follows:

Do you agrees with the City pursuing a regional approach to the funding of shared services (airport, ferry, library)? 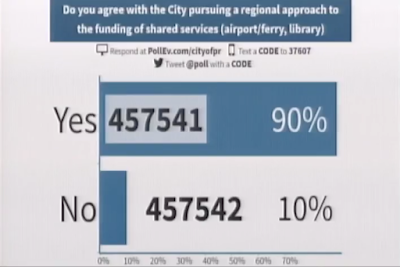 Do you agree with the city's decision to utilize legacy funding for major infrastructure projects to avoid burdening taxpayers? 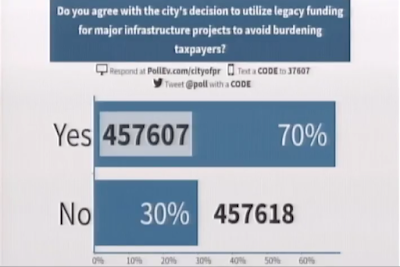 Do you agree that home and business owners shoulder too much of the tax burden compared to industry? 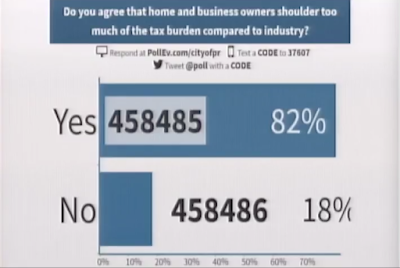 As the Mayor made note of towards the end of the evening, attendance was rather sparse in Council Chambers on Wednesday, a lack of participation which might give Council cause to think that there may be little interest in the community when it comes to how they develop their policies or how they spend taxpayers money.

Part of the lack of attendance for the Budget consultation could be the rather limited attention that civic matters receive from local media. With only selected items making it into the news cycle during the course of a week, featuring few, if any reviews of some of the larger issues that the city faces, or questions asked of City Council regarding the decisions that they make.

Another reason for the low attendance could come from the timing of the consultation session and where it fell on the calendar.

This year Council scheduled their public comment sessions during the annual Spring Break for local schools, marked by a two week break where many in the community head for warmer climates, or other adventures.

To close off the evening, the Mayor noted how the Budget process will progress as Council moves to finalize their financial planning on the year, noting that Council will offer up one more opportunity for comment, taking place on Monday evening as part of the Regular Council session starting at 7 PM.

You can review Wednesday evening's presentation from the City's Video Archive below.


More background on the Budget Process can be found from our Budget Archive page, while Discussion notes from City Council sessions can be reviewed from Council Archive page.
Posted by . at 11:06 AM