Former Pro at Prince Rupert Golf Course tees it up in Nelson, BC

The arrival of spring and a new golf season on the North Coast will bring a change in the club house at the Prince Rupert Golf Course, as the Course heads into the upcoming season still searching for a club pro for the eighteen hole community facility.

Dave Belling, who had served as the club pro at the 9th Avenue West clubhouse, left the Prince Rupert Golf Course and the community earlier this year.

Mr. Belling's time on the North Coast covered a year and a half, joining the Prince Rupert course in July of 2015, he resigned his position in February of this year, indicating that he had a better opportunity at hand.

His travels have taken him to the Kootenays, with the Granite Pointe Golf Club in Nelson recently announcing his hiring to the position of General Manager of the Nelson club.

Mr. Belling introduced himself to that community through the Granite Pointe Facebook page, where he outlined his duties at the course and offers an invitation to its members, as well as area residents to drop into the golf shop to hear more about the plans for 2017. 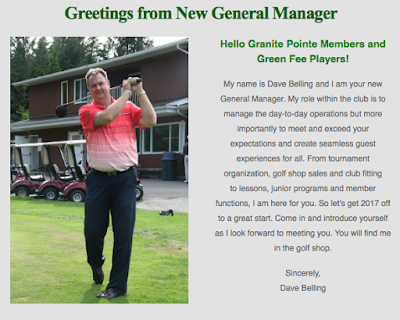 Since his departure, the Prince Rupert Golf Course has been seeking a new pro for the club.

However with it getting late in the recruiting season for such positions, the local facility may have to head into the spring and summer without finding a suitable applicant.

The facility currently lists a Golf Shop Supervisor as in place to oversee the operations of the club house, though the ability to provide lessons and organize tournaments will have to be addressed by the Golf Course Board.

As the Course moves towards the more pleasant weather of the spring and summer, they have new rates in place for the 2016-17 season, the schedule of rates covers a range of options from daily fees for nine or eighteen holes to season memberships.

A look at the hours of operation for the course and the Pro Shop can also be found here.

The final numbers related to 2017 Community Grant funding from the City of Prince Rupert and what amount the Golf Society will receive will be provided by the City in late June.

For notes of interest on the Golf scene in the Northwest see our archive page here.