As the final days of the 40th parliament were winding down in Victoria, residents of the North Coast were finding somewhat of a highlight package from their MLA for review, as Jennifer Rice sent out what will be the last home mailer from her Legislature office prior to the provincial election.

Ms. Rice used some of her budget for information services to produce a much larger and significantly more colourful review of her recent work in the Legislature, with a six panel overview on a range of themes.

Opening with her MLA's Report, she makes note of some recent economic developments in the Prince Rupert region, from the plans to build a propane shipment terminal at Ridley Island to the Phase 2 expansion project at Fairview Terminal which as the MLA notes will bring the "creation hundreds of union wage, family supporting jobs in Prince Rupert."

On LNG she takes note of recent suggestions that Pacific NorthWest LNG is exploring shifting part of its terminal project to the waters off of Ridley Island, a mention of the potential change in design to put the actual shipment part of the facility at that location.

As part of her commentary on that prospect, she reinforces her previous comments related to how the Ridley location is a more acceptable industrial site, particularly for those "communities concerned about protecting salmon migration routes", noting that indications of a potential shift of that element of the project is something she would support.

She also touches on issues related to Ferry Service in the region, noting the announcement of additional sailings for the Prince Rupert to Skidegate run and noting she is still advocating for further service improvements and reductions for ferry rates.

Also included in the review was a note as to some of the additional duties that NDP Leader John Horgan has asked her to take on in recent months, highlighting the work of the Standing Committee for Finance and Government Services and her work as the Opposition Spokesperson for Northern and Rural Economic Development.

Her report wraps up with the MLA noting her enjoyment at advocating for the North Coast and a hope that she will be able to serve the community for another four years, the latter a nod towards the upcoming provincial election campaign.

The information sheet also provides an interesting look at some of the key issues that have provided for the most requests or concerns at the local constituency office in Prince Rupert, with Housing concerns leading the list taking up 32 per cent of all requests directed to Ms. Rice's staff in the city.

Other areas where constituents had concerns included: 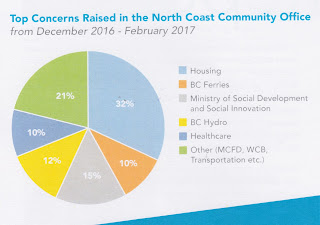 The remainder of the household mailer features a tour of the riding with the MLA from the Bella Bella Tug boat incident, the opening of the Haida Gwaii Hospital, work on banning the grizzly trophy hunt, a community luncheon in Prince Rupert with NDP colleague Melanie Mark and her attendance at Prince Rupert's All Native Basketball Tournament.

The information sheet does provide for a bit of what may be her narrative for the upcoming election campaign, but is also a project that could give her opposing candidate Herb Pond with a few talking points to make use of as well.

Particularly when it comes to her review of the economic picture of the riding, offering Mr. Pond the chance to highlight the struggles the region has faced over the course of her four years as the area's MLA.

For those that may not have received the latest correspondence from the MLA's office, we offer up the five pages of content below: ( click to enlarge ) 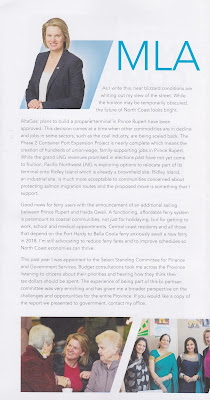 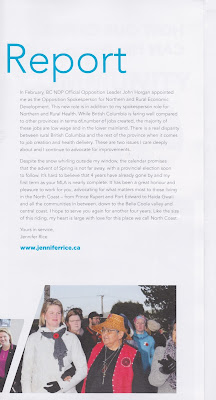 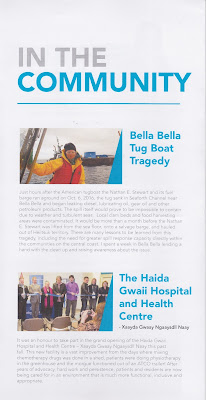 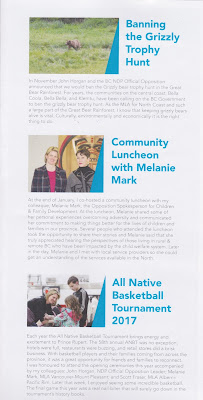 For more items related to the MLA's work in Victoria see our archive page here.