A Saturday night incident in the downtown core involving a member of the Prince Rupert detachment of the RCMP will see a case file handed over to the province's Independent Investigation Office for further review.

The circumstances from Saturday which involved an RCMP vehicle and a pedestrian, became a much discussed item on social media through the weekend.

The injuries to the pedestrian took place in the area of Second Avenue West and Eighth street.

Photos posted to a number of Facebook accounts provide images of emergency service personnel attending to the pedestrian, who witnesses say had been struck in the crosswalk in the 800 block of Second Avenue West. 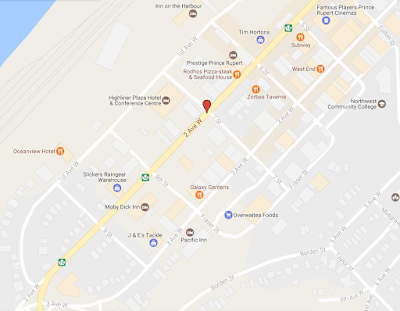 As part of their coverage of the incident, The Northern View has reported that the pedestrian was transported to Kitimat General Hospital, after no surgeon was available locally, the patient is expected to be released from hospital within the next few days.

The Independent Investigations Office will review the incident to decide if the injuries that were suffered by the pedestrian meet their threshold of serious harm and whether further investigation by their office may be required in relation to the case.

An investigation file has not been posted to the IIO website to this point.

The full review of the incident from local media sources can be reviewed below:

For more items related to Emergency Responders in the Northwest see our archive page here.
Posted by . at 8:31 PM

Email ThisBlogThis!Share to TwitterShare to FacebookShare to Pinterest
Labels: Police vehicle incident file to be investigated by Independent Investigations Office