The ongoing quest to hold the Liberals to their promise of electoral reform is a theme that the NDP won't be letting slide down the to do list anytime soon on Parliament Hill, with Skeena-Bulkley Valley NDP MP Nathan Cullen taking the lead on the issue today.

As part of the mornings proceedings on the Hill, Mr. Cullen delivered a petition with more than 130,000 names to Parliament today, calling on Prime Minister Justin Trudeau's Liberals to deliver what they had promised in the last election campaign.

Rising in the House of Commons, Mr. Cullen offered up a glimpse of some of the disappointment that Canadians have expressed through their petition signatures, many angered at the recent end to the public engagement process that was exploring the options for electoral reform.

Noting that it is the largest petition to ever be presented to the House of Commons, Mr. Cullen observed that the document calls on the Liberal government to declare its ongoing commitment to ensure that the 2015 election was the last Federal Canadian election to be held under the First Past the Post system.

The petition campaign was initiated by Kitchener, Ontario resident Jonathon Cassels and sponsored by Mr. Cullen, the first signature was marked on November 2nd, 2016, the final date for participation was March 2nd of this year.

More background on the petition process can be reviewed here.

The petition found its largest support from four provinces, with 114,011 of the 130,452 signatures coming from residents of Ontario, British Columbia, Quebec and Alberta 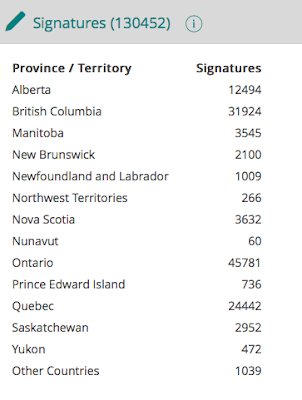 Prime Minister Justin Trudeau's Liberal government brought the election reform process to a rather sudden end earlier this year, a controversial decision which came following what had been a lengthy period of review.

The electoral reform review project was one which the Skeena-Bulkley Valley MP had become a lead actor and advocate for, taking to the work right from the launch of the engagement period back in May of 2016.

You can review our archive of notes on what is for now an abandoned process, from our political portal D'Arcy McGee.

To keep the theme of electoral reform alive, Mr. Cullen is making note through his Facebook page of upcoming public forums to be held in a number of communities in Ontario.

With the NDP MP hosting what are being called Keep Your Promise sessions, where those in favour of making change to the electoral system will explore how they will keep the heat on the Trudeau government. 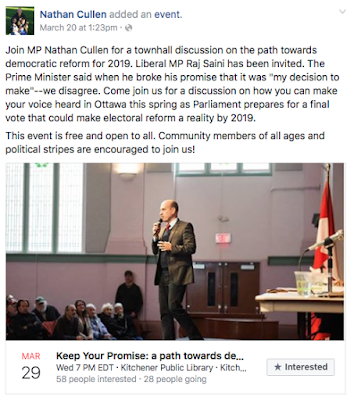 There is no indication to this point, if Mr. Cullen has plans to bring the Keep Your Promise public engagement movement back to his Northwest political base.

More notes of interest from Mr. Cullen's work in Ottawa can be found on our House of Commons archive page.
Posted by . at 10:22 AM