It's a project that is still very much in the early stages, but if enough stakeholders can be assembled and funding sources found, a new attraction may soon come to the Prince Rupert area, as part of a proposal to put a wildlife interpretive display in place in the city.

Prince Rupert City Council received a first look at what the project might look like on Monday, when Terrace based Conservation Officer Gareth Scrivner appeared in front of council to make a twenty minute presentation on the theme.

Making use of a number of information slides, Mr. Scrivner provided some background as to how he envisions such an interpretive display coming together.

Perhaps with an eye towards the volume of tourists that arrive in the Cow Bay area each year he suggested that the display might be most suited for placement somewhere in the Atlin Terminal area.

His initial thoughts present the project as one which could be in the form of a small gallery type of display with photos, videos and educational text that outlined the themes of wildlife and conservation.

Mr. Scrivner also noted that should the idea catch the imagination of the community, that theme could be expanded to offer more sophisticated and interactive options depending on the amount of financial resources that they could bring together.

Observing for Council that one of his duties as a Conservation Officer is to engage the community in discussion and provide more information on issues of wildlife interaction, Scrivner portrayed the proposed interpretive display as a community option that would help fill that need, as well as to offer an attraction for local residents and visitors to the community.

Among the partners he is looking to approach towards the project include the City of Prince Rupert, Local First Nations, UNBC, and local eco-tourism businesses and other interested members of the community. 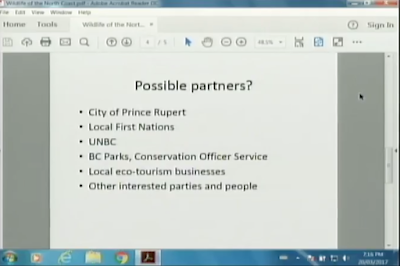 The first phase of the project planning includes seeking out those other partners, forming a committee or working group and then to explore the options for available funding and other resources to move the display proposal forward. 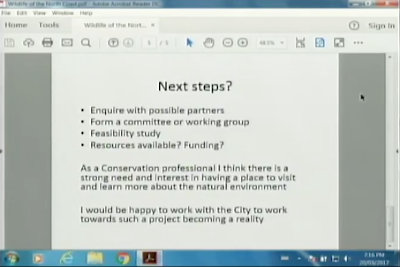 Council members were generally quite enthusiastic and receptive to his proposal, with a number of them offering up suggestions and asking questions about how the project could  move forward.

Councillor Cunningham called it a phenomenal idea and asked about whether it would be a full time display or a seasonal project, he also inquired about areas of funding for the proposal and noted that there were a number of vacant spaces in the city, so the display didn't necessarily have to be placed in the Atlin Centre area.

And while he cautioned that he couldn't speak towards providing funding by the city, but did suggest that the City could offer some expertise in setting it up the proposed display concept.

Councillor Randhawa called it a great idea and asked if there was any kind of idea related to how much the project might cost.

Councillor Thorkelson also echoed the theme of the project being a good one, observing that there could also be options for cooperation with such agencies as the Department of Fisheries and other area stakeholders to expand the scope of the display project.

She also had some thoughts on how the proposal could move forward, noting that while city staff probably didn't want to stick handle the concept, there could be a number of members in the community that may be willing to step up to help get the project underway.

Mayor Brain also offered up the prospect of the city council taking the project under consideration, with further discussion planned to see if anyone on Council is interested in being involved.

The Mayor also outlined a few suggestions focused on the community, as to where the City might be able to help bring together some support to explore the proposal further.

You can take a look at what Officer has in mind from the video archive of Monday's Council session, the presentation to council starts at the nine minute point.

Further background on Council discussion topics and other areas of interest about City Council can be reviewed on Council archive page.