Skaters have been working on their routines through the week, while the final preparations for costumes for the event wrap up as show time approaches.

The Doors to the Jim Ciccone Civic Centre open up Saturday night at 6:30, with the skaters taking to the ice at 7.

Tickets cost 10 dollars for youth and adults, the tickets for those Children 4 to 12 go for five dollars, while Tots 3 and under get in for Free. 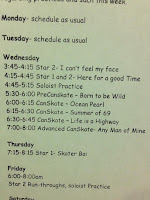 You can pick your ticket to the show at Oceanside Sports on Third Avenue West or at the door at the Civic Centre on Gala night.

The Prince Rupert Skating Clubs Facebook page features a sample of the soundtrack for the night from some of Canada's most recognizable performers, which offers up a snapshot of what may be in store for the audience when the skaters bring the gala to life.

You can follow the lead up to show time and take a look back at a busy and very successful season from their Facebook page.