AMHS Working Group report provides Alaskan Governor with some points to ponder on fate of ferry service; including what awaits the Prince Rupert service

The Alaska Marine Highway Reshaping Working Group has released the final draft of their report for Governor Mike Dunleavy, delivering the full review of the Alaska Ferry system to his office on October 2nd.

It was a ten month journey to explore the importance for the Marine System for the Alaskan communities that it serves and one that examined the number of challenges that the aging fleet is facing. 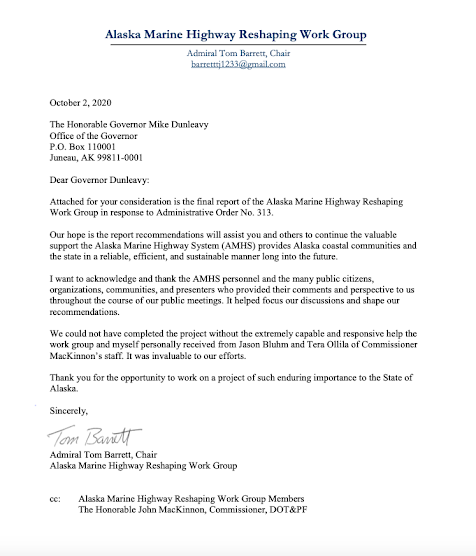 The wide ranging document covers a vast number of urgent themes for the struggling marine transportation system and explored some key notes that emerged during their review.

The value and importance of the system to remote coastal communities and the State as a whole, and the skill and dedication of the people who manage and operate the system
Improving system reliability
Reducing system costs and raising system revenue
Stabilizing system budgets
Strengthening system governance
Improving short and long-term strategy and planning, including fleet employment, operation, and service models
The document reviews the history of the AMHS and provides a number of recommendations towards how to address the current issues, improve service and build for the future. 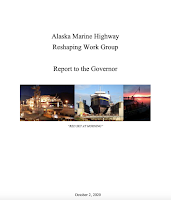 Among the volume of material for the Governor and his team to review will be recommendations on Strengthening System Governance,  Strengthening Governance Support, Improve System Reliability, Stabilize Budget Planning, Reduce System Costs, Renegotiation of Marine Union Labour Agreement, Increase System Revenue, Leverage Road Infrastructure
Of those categories, the one which will have the most impact on the service between Prince Rupert and Kethcikan is the quest to reduce system costs, with the report noting some of the current challenges facing the connection between British Columbia and Alaska and a range of options that range from  reduced service  to the potential elimination of the run completely.

The topic of the Prince Rupert service has made for a few comments through the public input forum for the report, the loss of the service since last year one which has seemingly had an impact on Alaskans.
Restoration of service to Prince Rupert, British Columbia must be prioritized. The AMHS identifies providing transportation between Alaska and Canada as part of its mission. While passengers can access Canada at the northern terminus through Haines, omitting service to Prince Rupert denies passengers a reasonable transportation route to southern Canada and impedes travel and commerce. While current pandemic-related border restrictions may merit temporarily reduced service to Canada, travelers may still enter Canada from Alaska for essential travel on a case-by-case basis, and AMHS should provide service to Prince Rupert for essential travel. The Reshaping Work Group should recommend to increasing service to Canada if border restrictions are relaxed or lifted in the coming months.
I have put input and made suggestions quite a few times, to officials of the AMHS, especially since 2003 when we began using the AMHS even more than we had previously, even then we used it a lot, going from Ketchikan to Prince Rupert and driving south to access the lower 48 area almost every year. For the most part I feel my suggestions and input have been ignored, and I feel that the management of the AMHS did not really want to change or make changes that would lower costs, just wanted to look like they were trying. I feel they deliberately just ignored suggestions from citizens AND CREW, and had no intention of trying things different to improve the system and reduce costs, just continue to blame the crews and cost of labor, (costs they negotiated to and agreed to) rather than attempt to do things like REDUCE FARES in the winter to increase ridership during the off season.
For now the Canadian and American governments have made the topic of the AMHS connection moot, with a border closure that would have kept the vessels in American ports anyways, a ruling that so far doesn't offer up any indication of being lifted.
But at some point the COVID related travel restrictions will be lifted and at that point the other larger issues of note will have to be addressed.
The AMHS last called on Prince Rupert in the fall of 2019, with the most recent advisory from the Alaskans that of a suspended service until 2021 at the earliest.
The fate of the service had been a topic of note for Prince Rupert Mayor Lee Brain for much of the last few years, though with the border closed the updates have been reduced significantly this year.
The main reason the ferry suspended its service in 2019 was the Department of Homeland Security concerns over security services in place in Prince Rupert.
That as well as the need for extensive repair for the Fairview terminal for the AMHS have been to two key focus points when it comes to keeping the marine transportation system in place.
The final option from the report, that of the elimination of the Prince Rupert service should serve as the focus for local officials, whomever is elected MLA on Saturday, MP Taylor Bachrach and for Northwest tourism officials.
With all working towards trying to find solutions to those two outstanding issues and engaging with their counterparts across the A/B line.
The complete elimination of the Prince Rupert  to Ketchikan route would be a significant setback towards tourism for this region, not to mention the relationships that have been built between to the two communities since the first Ferry arrived in the sixties.
In the end British Columbians will have no say in the fate of the Service, nor any financial interest in how it is funded; however, for Prince Rupert in particular, ensuring that the value of the connection remains at the forefront of the discussion at least gives us an opportunity to help shape the ongoing debate.
You can review the full Report for the Governor here.
More notes related to the Alaska Marine Highway and its connection to the North Coast can be explored here.