The District of Port Edward may yet see some kind of LNG development for the North Coast after all, with the District Council providing for fist and second readings at the October 13th council session for a proposed facility to be located along Highway 16.
A company called Port Edward LNG is proposing the facility, with the project to take up 37 acres of property along the highway near the current Pacific Natural Gas pressure regulating station and BC Hydro Emergency power generating facility.
The District Councillors, seemingly good at keeping things under wraps, with the first indication of the next North Coast industrial project came at from the Port Edward council chamber on the 13th.
Port Edward LNG would have an initial production capacity of 250,000 US gallons per day, with the potential to double that output in a second phase of development.
The District is currently considering the request to change the zoning from that of A2 rural residential to that of Heavy Industrial M3, a process which will require an Official Community Plan and Zoning Bylaw Amendment as well as a Development permit.
The proponent has to this point engaged with all required regulatory agencies regarding approvals and permitting processes and has secured the required natural gas to feed the facility; though it has not as of yet been listed in the index of projects from the Provincial or Federal assessment agencies. 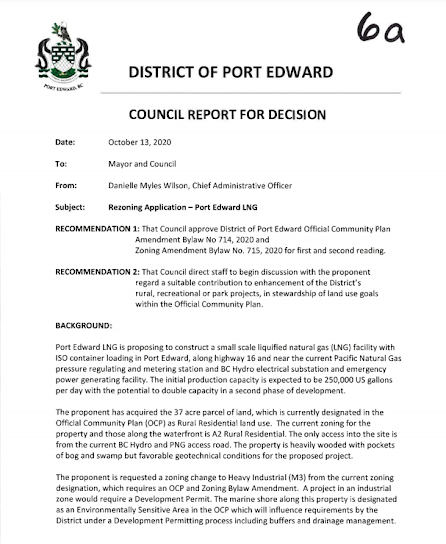 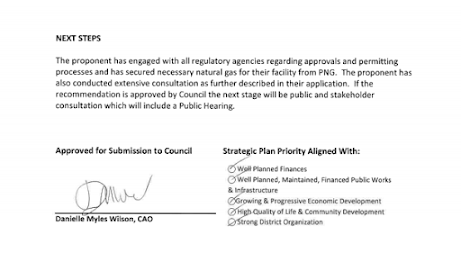 Few details on the proposed development, such as a timeline towards operations or the number of jobs that may be generated from it have been released to the public to this point.
Though the District notes that if residents wish to view more detailed project information as has been submitted thus far they can contact the District Office.
As the re-zoning process moves forward there will also be a public hearing scheduled for residents to share their thoughts on the proposed development.
The Port Edward LNG proposal is the first significant toe dipping towards LNG for the North Coast region since the large scale Pacific Northwest LNG project for the community was cancelled in July of 2017.
With word that the District is considering a new entry towards BC's LNG ambitions we've created an archive page for the new proposal here.
Further note on District of Port Edward themes can be found from our archive page here.
Posted by . at 9:25 AM