The player who has been tapped as a power forward is now in his second year of Junior A play in the BCHL and now will be pulling on the sweater of the Cowichan Lake Capitals.

That after the Island team reached into the Interior to swing a trade with the Vernon Vipers which will bring Fudger out of the snow and back to the more familiar rain on Vancouver Island.

Last year the Rupertite made his BCHL debut with the Vipers, he played 48 games for the Vipers and had 2 goals and 12 assists in his rookie year of play.

Cowichan Lake welcomed him aboard as part of an update for fans that broke down the details of the multi player/options trade. 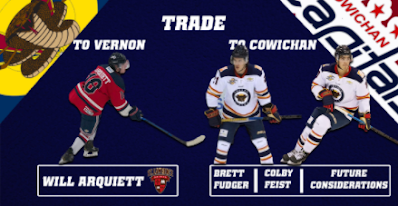 Fudger made the jump to Junior A after a much acclaimed run in Major Midget Hockey, where he delivered over a point per game in his final year prior to the move up.

The BCHL restarted its operations earlier this month, mindful of a range of COVID required measures for the start of play this season.

The first opportunity for the young Rupertite to hit the ice for his new team comes up tomorrow night when the Capitals travel to Nanaimo, part of the extended training camp period now underway.

The BCHL previously announced that its regular season will start December 1st, though the prospect of playing in front of an audience is still not on the horizon, with current restrictions in place.

The Capitals have a couple of options for those of us in Prince Rupert to follow along as Fudger's hockey journey continues, with both an audio broadcast feature and Pay Per View options available the Cowichan Lake Capitals website.