There's much to do this evening as we prepare for the final evening of October, from the handing out of Halloween treats, to changing the clocks and a little full moon gazing, though the latter is probably a doubtful experience considering the weather forecast.

As we do twice a year (for now) the time to adjust our time has arrived, with the 2AM reminder (earlier if you retire at a sensible time) to Fall Back and gain an extra hour of sleep into Sunday.

With the time change however will come the darker days and nights, where most of us will rise in the morning to head out into the day in darkness and return home later in the afternoon to much the same situation.

This year may just be the last time for the twice a year time warp however, yesterday in what has become an annual message, Premier John Horgan noted he is hopeful that  his plan to banish the need for the changing of the clocks will move forward in 2021.

Though as they say, time will tell ...

While he awaits the collective moves of the south, the Premier has already been beat to the time change banishment by the neighbour to the north, with Yukon having scrapped the need for a seasonal time change.

The RCMP in British Columba took note of the unique confluence of events for tonight in a Social Media message, as well as a call for extra vigilance towards safety as the daylight hours decline. 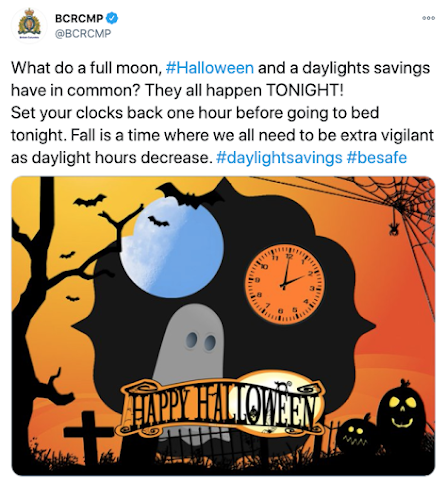 ICBC as well are calling for increased awareness for all, noting how nearly half of all crashes involving pedestrians take place between October and January.

As we've seen in Prince Rupert in recent years, motorist/pedestrian incidents have been of concern and resulted in injuries.

Towards more safety they have offered up some helpful notes for both pedestrian and motorist.

Focus on the road. Always leave your phone alone while driving.

Be ready to yield to pedestrians, especially when turning at intersections and near transit stops.

If a vehicle is stopped in front of you or in the lane next to you, they may be yielding for a pedestrian.

Expect the unexpected, even mid-block, as pedestrians may be jaywalking.

Be careful at intersections. Watch for drivers turning left or right through the crosswalk. Drivers may be focused on oncoming traffic and not see you.

Don't jaywalk - always use crosswalks and follow the pedestrian signs and traffic signals.

Make eye contact with drivers, as it's hard to see pedestrians when visibility is poor in fall and winter. Never assume that a driver has seen you.

Remove your headphones and take a break from your phone while crossing the road.

Be as reflective as possible to make it easier for drivers to see you in wet weather, at dusk and at night.

You can review all of ICBC's advice here.