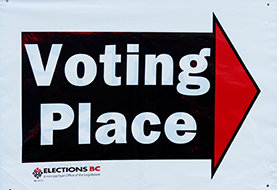 With the Advance polling opportunities coming to an end earlier this week, Elections BC has now released some background on the participation of voters in the options prior to tomorrows General Voting Day.

For the North Coast, the use of the Advance poll seems somewhat light, with 15,471 eligible voters noted for the constituency, only 2,468 took advantage of the vote early option.

Stikine had similar returns as the North Coast, with 2,708 of 14,250 voters heading out early to cast a ballot.

Skeena has seemingly generated the most interest in the advance vote option, as of the final day, 4,976 of  the 21,262 eligible Skeena voters had voted early.

An indication perhaps as to why that riding is one of the key ridings in the province to watch on Saturday night.

The voters of Nechako Lakes were the least likely to vote in advance with only 1,539 of that riding's 17,418 voters casting an early ballot.

The other option that has caught the attention of voters this  election has been the Mail in Ballot opportunity, and there again the requests for mail in ballots had a range of response across the Northwest

For those who have requested the Vote by Mail option, Elections BC notes that for the votes to count they need to be in the hands of election officials by the close of the polls on Saturday.

So with the mailing deadline past us now, they offer the following advice.

As for the twin results of the advance vote options and mail in ballot, combined the two guideposts to voter turnout seem to point to two ridings to watch for any downward trends.

With the North Coast and Nechako Lakes perhaps the areas of note when it comes to turn out at the polls.

In the 2017 General Election the final results provided for vote totals as follows:

How well the candidates have engaged with the voters in 2020 in the four ridings of the Northwest will provide for a fascinating look as to whether this years voter turnout increases, decreases or mirrors the results of 2017.

You can find out where to vote in your community through the Elections BC Vote Locator Map here.

For a look back at some of the themes of this years campaign see our archive page here.