Stikine MLA Nathan Cullen is getting a quick reminder on the speed of message delivery from twitter, with a short note from the MLA this morning on some controversial support for American President Donald Trump getting him some notice.

In his morning tweet on American politics, Mr. Cullen commented on a tweet from Globe and Mail columnist Gary Mason who had expressed his disappointment at the support golfer Jack Nicklaus had offered to the President's campaign by way of an endorsement letter.

The Stikine MLA seemingly confusing the golfer with actor Jack Nicholson, who as Mr. Cullen notes is a frequent feature attraction at the games of the NBA's Los Angeles Lakers. 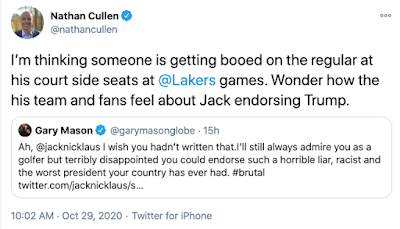 The letter from the golfing legend has become a hot topic on twitter through the morning, with many of those engaged in the social media platform expressing their surprise and disappointment at the political commentary and endorsement from Mr. Nicklaus. 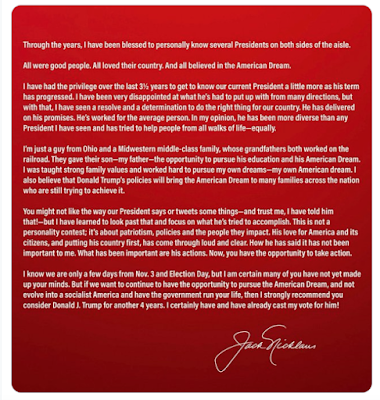 As for the Stikine MLA, he has moved on from the Nicklaus story and taken to other themes of note for social media on the day.

Mr. Cullen's days of idle tweeting may soon be coming to an end however, with John Horgan currently in the process of putting together a cabinet for his new government.

As the Premier ponders his options, many political observers believe that the former MP and now new MLA will be shoe in for a position, one of a number of high profile candidates that the NDP will be looking to included around the cabinet table.

Update: The MLA corrected the twitter Hansard at just after 1130 this morning 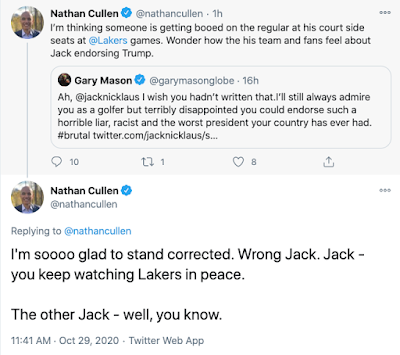 For more notes on the provincial political scene see our archive page here.