BC NDP candidate Nathan Cullen is facing a new Northwest political controversy today, that after comments made prior to the Stikine candidates debate of last week were caught from an open microphone.
The account of the commentary makes note of  Mr. Cullen having made a number of disparaging remarks about the neighbouring BC Liberal candidate North Coast candidate Roy Jones Junior.
The latest campaign issue gained widespread attention today, with Mr. Cullen issuing a public apology to Mr. Jones as part of this mornings NDP livestream that explored a Prince Rupert related theme on Watson Island.
"A story recently surfaced about some comments I made just prior to an all candidates debate here in Smithers about Roy Jones Junior, at which I unreservedly apologize for, they were inappropriate. I've since spoken with Roy and apologized to him and spoken with other Haida leadership. So I just wanted to get that off the top, it was wrong what I said, I take it back entirely and I apologize for the harm that I've caused Roy" -- Stikine NDP candidate Nathan Cullen, with an apology for BC Liberal North Coast candidate Roy Jones Jr.
An audio excerpt (which seems to have been culled from the first few minutes of this article/video from the Smithers based Interior news) now making its way around social media today has Mr. Cullen suggesting that Mr. Jones does not have much of a chance in the North Coast election and mocked Mr. Jone's local nickname. 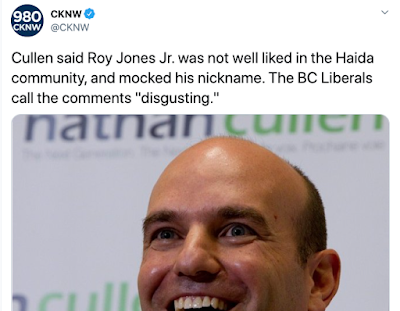 The BC Liberal campaign of Mr. Jones addressed the issue today with a post to Mr. Jone's own campaign Facebook page, making note of the comments from Mr. Cullen and calling him out for being disrespectful towards the Indigenous leader from Haida Gwaii. 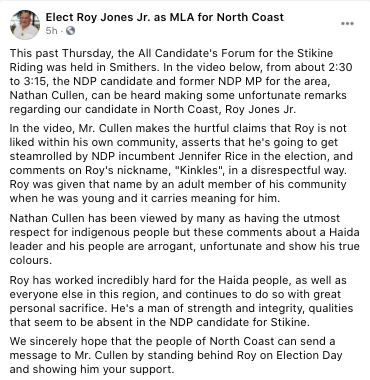 It has been a rough return for Mr. Cullen to politics following his retirement from the federal scene.
The former federal MP rejoined the political fray with the call of the provincial election and immediately was drawn into controversy at the nomination phase of his campaign.
His nomination to the contest coming after much controversy was noted over  how the party had sidestepped the NDP's policy of replacing retiring MLA's such as Doug Donaldson with candidates that reflected the goals of equity for the NDP.
How the latest situation may impact on his quest for a provincial seat will play out over the course of this week ahead, with voting day fast approaching on the 24th.
So far the NDP's Jennifer Rice, who is Mr. Jones actual competitor in the North Coast race has not said anything related to the Cullen incident and how she may feel about his remarks or how it may impact on her campaign in the election.
Mr. Cullen is one of five candidates seeking office in Stikine, the other four contestants in the election no doubt hoping that his commentary of this week continues to haunt him towards election day and if the weekend news flow is an indication that seems likely to take place.
NDP's Nathan Cullen apologizes over comments about Haida Liberal candidate
NDP's Nathan Cullen apologizes for making fun of Liberal's First Nations candidate
Haida BC Liberal candidate denounces NDP's Cullen's racist remarks
NDP candidate Nathan Cullen under fire for dismissive comments about Indigenous Liberal candidate
For more notes on the 2020 campaign see our archive page here.
Posted by . at 3:36 PM