An advisory from the Loblaws corporation of a local team member of their Shoppers Drug Mart chain in Prince Rupert testing positive on a presumptive case of COVID-19, sent the Prince Rupert rumour mill into an accelerated state over the weekend,

The report one of a number of  accounts of COVID cases in Prince Rupert that were being speculated about through Facebook and other social media platforms, though in the case of the Shoppers Drug Mart notes, one confirmed by the company.

The listing for Prince Rupert was one of a number of notifications listed in BC by the parent company and outlines that in the local case, the last day the team member work was on October 17th.

As part of the Shoppers Drug Mart/Loblaws policies a number of protocols now increase for the local store, in consultation with local public health officials.

Included among them monitoring at home for those who worked with the person, with all now in self-isolation  to monitor for further symptoms as required.

Northern Health has  a long established policy of not making note of cases reported by third parties or those of a speculative nature.

With the Health Agency only alerting the public when there are Public Exposure Alerts in effect and at this time, Northern Health does not have any such notifications in place for the community. 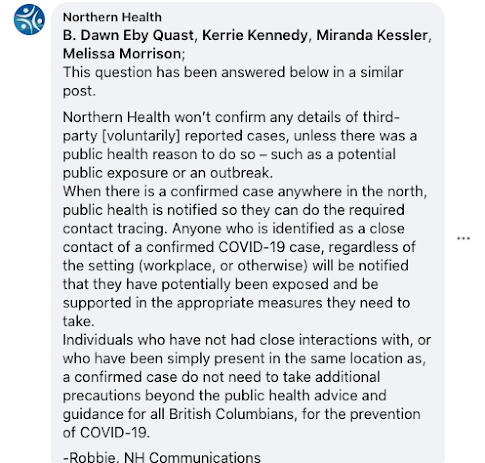 That Northern Health online forum is currently providing for much community comment on the topic at the moment.

The only breakdown of COVID cases released by community comes from the British Columbia Centre for Disease Control, which last updated their listings as of the end of September.

As we outlined on October 13th,  the BC CDC had listed 2 cases of COVID recorded in Prince Rupert from January to September. 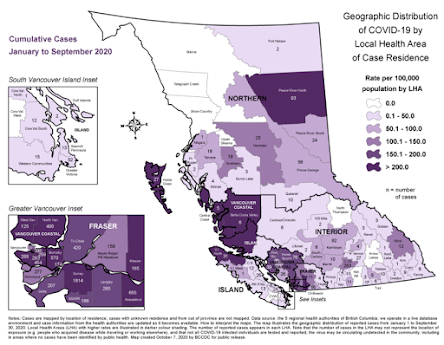 Their most recent listings of public exposures can be reviewed here.

Further background on items of note from Northern Health can be found here.