" The municipal water quality provided in Prince Rupert has known issues in Prince Rupert and although it is generally considered potable (safe for human consumption) it has low PH and high turbidity. Currently Prince Rupert Regional Hospital (PRR) and Acropolis Manor (ACM) are on a local boil water advisory based on the recommendation of environmental health due to the Prince Rupert source water and treatment process that could result in undetected incidents of water borne pathogens in the municipal water supply." -- From Northern health's Project Summary in September for solutions for local health facilities in the city

With an opening line that pretty well outlines the current status of Prince Rupert water issues, Northern Health appears ready to spend some money to at least provide some remediation to their own internal water issues at two local facilities, Prince Rupert Regional Hospital and Acropolis manor.

The topic of the water at the Northern Health facilities has made for much discussion in recent years, with themes related to it occasionally spilling into social media accounts from those who are patients or visiting the services of the two facilities.

A Request for Proposals posted on the Bid BC website in late September, outlines the challenge ahead for successful bid applicants, as Northern Health outlines what it is they are dealing with and how they hope to provide for some relief from the long running concerns. 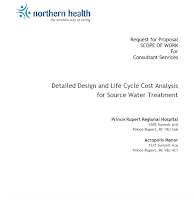