BC Votes 2020: A Pandemic election where the voters embraced some social distancing from the ballot boxes


There were two major themes from Saturday's final results in the 2020 snap British Columbia election.

The first: Premier John Horgan was rewarded by his party faithful for his decision to seek a majority government, something that was delivered for the Premier by 10 PM  on Saturday.

It was a result which had the NDP taking a number of key Vancouver ridings from the BC Liberals, sending the centre right coalition party off to do some serious soul searching for its future.

The second:  In a election that seemingly few British Columbians wanted or were interested in, a good number of them registered an opinion by their absence from the polling stations

Highlighted by a voter turnout alarmingly low, with a large number of would be voters just sitting the whole experience out.

The last forecast heading into the election had a potential voting pool of 3,485,858 registered voters in the province, however only 1,212,722 voters had made their way to a ballot box by 8PM on Saturday night.

By the time they had counted the last of the ballots on hand province wide on Saturday, those who had participated in the 2020 vote, had registered a turnout that was among the lowest in the modern era of politics in the province.

Saturday's vote totals dropping from the previous low of 2009 which had received a 55 percent turnout. 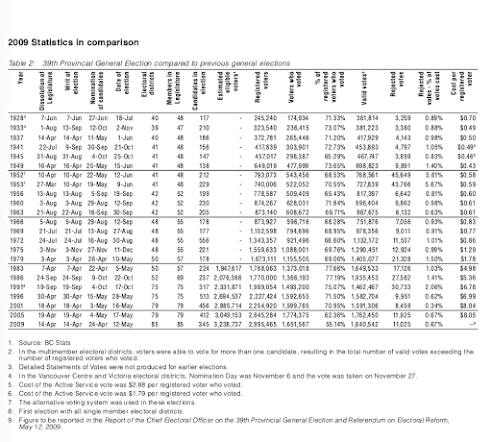 There are half a million mail in ballots still outstanding and to be counted, though how many of those who requested them, actually put them in the mail in time to be counted won't be known for two weeks or so.

Regardless, while those votes may potentially shift a result or two in particularly close races, the volume won't change the new low bar for voter turn out for the province.

Whether it all means that British Columbians were so satisfied with the performance of the Premier and his party that they felt no need to vote; or that they were so dis-interested in the call to the ballot box that they took the day off will be up to the political scientists to divine for us.

In the Northwest there was no change to the distribution across the four ridings and for the most part all the political faces will be familiar, with three incumbents in Jennifer Rice, Ellis Ross and John Rustad returned to office, while the newcomer to the legislature is a well know political force in the region.

That as former Skeena-Bulkley Valley Nathan Cullen prepares to take his seat in Victoria; though somewhat surprisingly sent there in a Stikine contest where he received less than 50 percent of the vote.

When it comes to the number of voters heading to the polls by election day, the drop in interest in the election in the Northwest was the largest on the North Coast where only 5,350 of the potential 15,471 cast a ballot by Saturday night.

Ms. Rice, as the NDP incumbent returns to Victoria with 72.79 percent of the vote from her victory of Saturday and the support of the 3,894 happy voters having put her there; but she enters her third term with 1,348 less votes than she received in 2017.

The campaign in the riding provided for little enthusiasm and in a time of COVID even less engagement with the voters it seems.

If anything, this was an election where the NDP did a good job of getting out its traditionally strong vote;  while the BC Liberal supporters seemingly were less motivated on the North Coast.

Where all those Liberal voters were on Saturday is a question for Liberal organizers to examine, but one place to scratch off their list as they look for clues was the Jim Ciccone Civic Centre and other polling locations around the North Coast.

Jody Craven, running as a BC Libertarian on the North Coast attracted 238 voters supporting his themes for 2020.

The Greens in this campaign were so dis-organized that they couldn't even field candidates, effectively surrendering any progress that they may have made in the region over the last decade and leaving them somewhat irrelevant to the discussion of issues for the region.

Elsewhere in the region the voter turnout looked as follows:

Total Vote count for all ridings across BC 2020 can be reviewed here.

Total Vote count for all ridings across BC 2017 can be reviewed here.

While all the candidates should be congratulated on their success at the polls and thanks offered to all who contested the election, there is some work ahead towards engaging voters with the democratic process again.

As the victors move forward to their duties ahead, they and their parties may want to try and find some answers as to why there is such a disconnect between those elected to office and a large number of those who are on the voters list who seemingly just didn't care about the 2020 campaign.

As the regional reviews of the election come in we'll archive them below:

For a look back at the 2020 campaign see our archive page here.

A wider overview of the final count for 2020 around the province can be found here,  while a look back through the campaign is available from our Victoria Viewpoints archive page from our political blog D'Arcy McGee.