On Saturday, Mr. Cullen issued a formal apology for his remarks, with NDP leader John Horgan also speaking to the percolating issue on Sunday offering his comments  that expressed his disappointment in the former MP, but resisting any suggestions that he should be removed from the election campaign.

As part of his review of the situation, The Premier made note of the support for Mr. Cullen from the Council of Haida Nation, which had put forward a statement on Saturday making note of the NDP candidates work as MP. 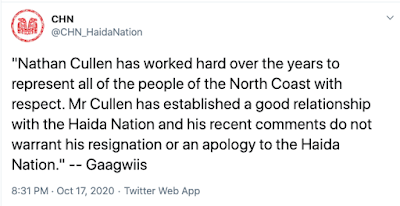 As Mr. Cullen's dismissive commentary on Mr. Jones became a prominent weekend topic the timing of it all didn't prove helpful to a current NDP campaign theme; that as the BC NDP was actually putting a focus on it's five high profile Indigenous candidates, featuring their campaigns prominently on their website.

Mr. Jones, spoke to Mr. Cullen's comments through both of his virtual Open Houses on Sunday, noting some of the pain it had caused for his family, particularly his wife who as he noted 'had always admired Nathan for his commitment' and how his actions of the weekend were devastating and heartbreaking.

The North Coast Liberal candidate also observed how Mr. Cullen does not speak for Haida voters; as well as to share the personal impact that his words had on him.

"That's not up to me or him, the Haida will put their ballot where they put their ballot as they have their right in British Columbia ... I was further disappointed and I want to apologize to my friends up  in the Stikine riding there because you know it was real heartbreaking to see things happen where a person deeply tried to discredit me and mock me for having a name and not knowing anything about the name"

Mr. Jones also took note of the CHN suggestion that Mr. Cullen did not require an apology to the Haida Nation, promising to expand further on his thoughts on that through a press release to come later.

For his part Mr. Wilkinson who was travelling and suffering from a fading cel phone connection, paid tribute to the work of his candidate during the campaign with a short appearance during the Open House where he stated:

"We need to think clearly about what's going on with Mr. Nathan Cullen who was handpicked ... an older white guy who was a friend of the Premier, that's his major qualification. The other thing that he did was  he made fun and ridiculed my Indigenous friend Roy Jones Junior and that is just plain wrong and John Horgan has made no apology for that it's a test of who he is as a person.

And he caused this unnecessary election and now he's insulting a completely capable businessman called Roy Jones Junior that's not good enough. We stand for equality, for opportunity, for fairness for everybody and it's not OK for the leader of a political paper to say 'Oh Well, Nathan Cullen just made a little mistake'. It's not a mistake,  it shows his character and both Cullen and Horgan need to be ashamed of what they did"

You can review the leaders observations, as well as those of the Liberal leader from the replay of the Prince Rupert virtual Open House below

Skeena MLA Ellis Ross also weighed into the Cullen controversy on Sunday putting forward his own statement  and speaking through his Facebook page, observing how:

"There’s no place in British Columbia for racism. The statements made by Nathan Cullen, which he thought were private, and John Horgan’s subsequent refusal to condemn them are very disturbing."

So far, North Coast NDP candidate and incumbent MLA Jennifer Rice, who is Mr. Jones competitor in the North Coast contest has not issued any formal comments related to the weekend controversy.

The weekend comments also generated some significant attention with the provincial media, you can review some of those accounts from our Victoria Viewpoints archive for the weekend here.

For more notes on the North Coast and Northwest campaigns see our archive page here.