The goals of transparency and accountability took a bit of a hit this week for Prince Rupert City Council which suffered some technical glitches that seemingly have resulted in the video record of their October 26th Council session to be lost and once again boldly gone to where some Council session have gone before.

Good works of hopefully good governance that are now drifting around the airwaves of the solar system we imagine, set to confound Martians or Saturnians at some point.

Though perhaps as they view the city's efforts in governance they may like the way Mayor Lee Brain facilitates his Council sessions and drop down to ask us to take them to our leader.

Normally by Friday of a Council week we have delivered our Council Timeline Feature, which provides a bit of an expansive review of the themes of the City Council sessions, however our City Council archive collection will be incomplete for 2020, with the October 26th recording now seemingly not available.

As we noted on Tuesday, Monday's council session started promptly on time at 7 PM, but Mayor Brain had barely worked his way through the Agenda for the night, when like an episode from the old days of SCTV the screen flashed and up popped up Kitimat Mayor Phil Germuth.

The Kitimat Mayor and his council collective already digging into what was a full night of work ahead for the Kitimatians.

Prince Rupert viewers were teased a few times with the prospect of returning to the Television Studios of 424 Third Avenue West, but after oh so brief snippets of appearing and disappearing dialogue over the course of twenty minutes, the broadcast abandoned our City Council for the bright lights of Kitimat. 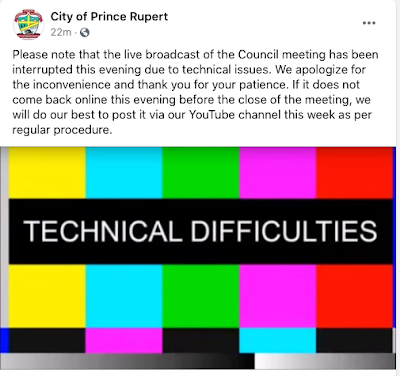 Towards the technical issues, the City issued a short notice to their Facebook page as the night evolved, offering up some hope of video replay at some point this week through the City's YouTube page. 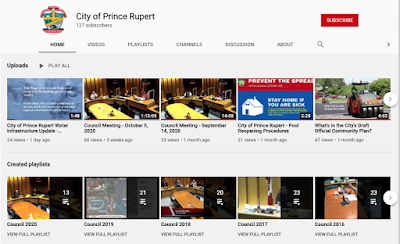 But alas as we head into the last hours of the Friday work day, the YouTube page remains in its Council time warp, with the last Council meeting entry that from October 5th.

Since the initial advisory of the 26th, the lost video appears to be something of an out of sight and out of mind thing, with no notification through the range of civic info streams of the City having given up the quest for the missing session and no acknowledgement that the broadcast is lost forever.

While they have had some apparent problems in providing for the actual video tick tock of the Mayor and Council the people's official record if you will, the Communications office has been busy with a few other themes.

Among them the city's official review of their work from Monday, which provides for some select talking points, but few details as to the full course of the nights activities.

For instance one item from the update makes note of a delegation appearing at City Council's Committee of the Whole on Monday evening, with some concerns over plans for additional Housing from BC Housing in the Kootenay area.

That short synopsis from the City, doesn't really seem to do justice to the presentation of the delegation, a portion of which actually made for some of the short moments where viewers at home were able to see the Prince Rupert session live.

When we faded in to the scene, one member of the delegation was involved in what seemed to be a very vigorous discussion on the amount of rental housing that has been concentrated in the Kootenay area ... unfortunately just as the conversation with the Mayor was heating up,  the screen again went to black before we could learn much more of their notes, or what else the Mayor had to say to them other than that a public hearing would be held at some point to address any concerns. 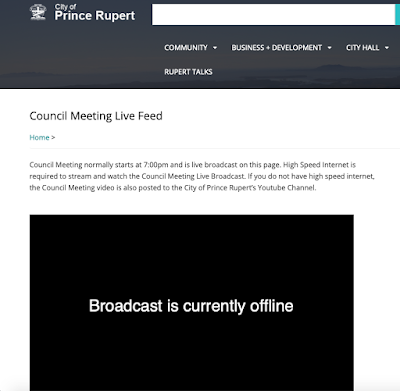 Hopefully the Kootenay Avenue area delegation will return for that Public hearing event, as it does seem like they were well prepared and had some valid points to deliver to the city's council members.

While the YouTube page will seemingly be short of content, such is not the case for the City's Facebook page and that of Mayor Brain's, both have been busy places this week as the City pushed a few of the themes they want to get out to residents.

First with a video presentation and update on the city's hopes for a water filtration plant by 2023, as well as a Facebook page contribution from the Mayor to highlight the recent announcement of the selection of a new location for the RCMP detachment for the City, the latest posting finding much commentary from the mayor's faithful followers.

Monday, was not the first time that a Kitimat presentation took the place of Prince Rupert council's work on the night, as we noted back in December of 2017, the very same situation popped up for Prince Rupert viewers.

That trip back in time like the most recent one, which provided for a look at the work that the Kitimat  Council conducts in a public session.

Hopefully, the City can shake the gremlins out of their video processor by the time the November City Council sessions arrive.

If not, we always have Kitimat to check out, though that could be something that the Prince Rupert team may not want their constituents to take explore all that much.

Beyond the time that they spend in public session at the office, their Agendas seem to feature a lot of themes that Prince Rupert Councillors may want to give some thought towards; with much in the way of information sharing from the local RCMP detachment, Fire Department and other civic departments. on a monthly basis 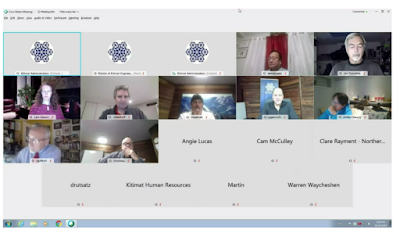 A look at their video replays also indicates a fair bit of community engagement and participation even during these times of COVID, something which perhaps allows the Kitimat councillors and Mayor to be a little more aware of the concerns of the community.

For a glimpse of how they deliver on public governance down the road, see the Kitimat website here.

Our look at some of the past work of Prince Rupert City Council can be reviewed here.