City of Prince Rupert/Northern Health issue Water Advisory, with a recommendation to BOIL WATER for a number of residents 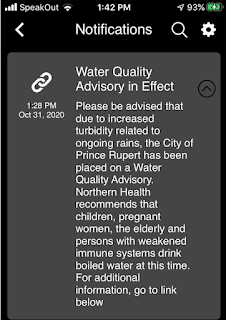 The weekend weather has once again increased turbidity levels in the city's drinking water supply and as a result, the City of Prince Rupert has once again issued a Water Advisory for residents.

The notice posted to the city's website and information streams Saturday afternoon notes that Northern Health recommends that children, pregnant women, the elderly and persons with weakened immune systems drink boiled water at this time.

In their advisory which you can review in full here, the City notes that the twin elements of Heavy rainfall and our current use of Shawatlans Lake are believed to be the contributing factors to the recent stream of increased incidences of elevated turbidity.

The message is also available on the City's Facebook page and was relayed through their mobile app.

The Mayor has also taken to his Social Media page with his own update on the current situation. 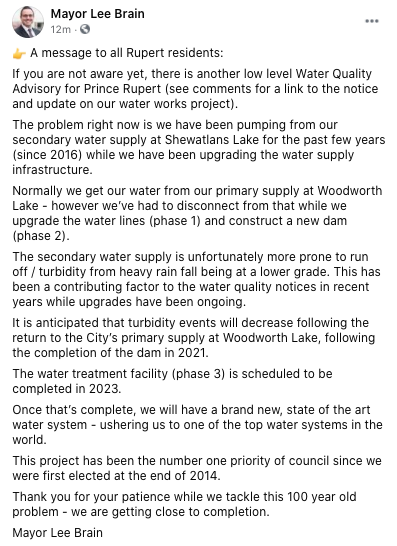 As we outlined earlier this week, the City has plans for a water treatment facility, anticipated to be completed in 2023.

More on the city's infrastructure plans can be found here.

The most recent water advisory was lifted in late September, you can retrace many of the previous water woes of this year from our archive here.

In late 2017/early 2018 Prince Rupert residents were on a Boil Water Order for 43 days with a longer lasting Water Advisory also in place through to March, you can review those past themes here.