A social media election campaign for the North Coast that missed more than a few themes ... 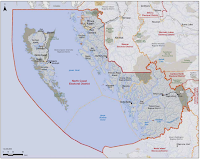 Those North Coast residents, who have not already voted by mail or in advance polls, will head to the voting booth on Saturday, as the 2020 provincial election campaign comes to a close.

Their decision one which will render a verdict on whether the Premier over reached in his quest for a majority government during an increasingly worrisome pandemic, or if he made the correct call to seek a larger mandate for what may lay ahead for the province.

For this region, COVID has meant a very different campaign and one that really never hit a stride of any kind, mostly the campaign message making came from Social media and for the most part, only two candidates participated in an active campaign that addressed some of the concerns of the North Coast.

Incumbent Jennifer Rice, mainly stuck to the NDP talking points, her social media stream mostly featuring photos of her campaign signs and a litany of NDP policies and programs from the last few years as government.

For his part, BC Liberal candidate Roy Jones made the best use of his time in the social media spotlight, putting a personal narrative to many of his topics and speaking to a number of issues that have been topical in the region, though he too at times has been true to the BC Liberal theme book.

BC Libertarian Jody Craven has run the most mysterious campaign, with little actual interaction with those he would like to represent; his social media feed mainly topics of national scope some rather controversial elements of our times, with few direct references on themes unique to the region he wants to represent.

The social distance campaign had its start during the two online forums, where some  selected topics made for the narrative, first for Prince Rupert/Port Edward and then for the rest of the vast expanse of the North Coast.

Some of them key issues such as housing which is clearly the dominant issue for the region, while may other topics took a wider provincial focus and weren't focused on the North Coast.

Something that didn't really offer voters much to gauge the candidates on.

The lack of a public audience at those forums owing to COVID, meant that there was no feedback for the candidates to build on, nor an opportunity to introduce questions, or challenge some of their commentary. something that might have knocked the three of their prepared scripts and provided a look at to their  wider overviews.

More importantly and in somewhat of a lost moment through the last number of weeks, there were a number of issues that have been significant topics of note through the last three and half years of the NDP government that did not get much if any attention.

If you lived in Port Edward, Metlakatla or Lax Kw'alaams you may as well be voting in the Skeena campaign, none of those communities gained much of a mention this time around for the North Coast three, to a lesser degree the same could be said for Haida Gwaii and the Central Coast.

Normally important issues in this constituency, themes such as Education, the local health care situation and concerns over service levels, the long sought after expansion of services for mental health, drug addiction and other social concerns didn't get much of an overview.

Nor  did concerns over transportation and the range of topics that make for the relationship between the provincial government and the City of Prince Rupert get much attention.

How do the candidates feel about industrial development? What kind of economic growth do they wish to see for the region?

Hard to tell, those topics and many others haven't really carried the narrative of the campaign.

In any campaign it's the unknowns that could shift voter intent or give pause for voters as to how they will cast a ballot.

For the North Coast the unknown came last weekend when Stikine NDP candidate Nathan Cullen became embroiled in a controversy, that stemming from comments that he made about the BC Liberal candidate Roy Jones Junior on the North Coast.

Mr. Cullen apologized for his remarks last Saturday, however to this point the NDP's Jennifer Rice who is running against Mr. Jones has not issued any kind of public statement related to the incident, one which was centred on her own riding and indirectly on her own campaign.

Whether Mr. Cullen's comments will affect her count on election day remains to be seen, but one thing is certain, it put an unfortunate tarnish on the local campaign and added an unexpected element that Premier Horgan had to contend with.

In the end, when you pick up the pencil and prepare to mark a ballot, the one guiding theme for us should be who do we think would best represent our local concerns in Victoria, not who will represent Victoria to us.

When it comes to the larger provincial view, we head to the polling booth with very little to use for reference as we make a decision on whether to reward the Premier with his desired majority government, or if a change of government may be the direction we wish to choose.

None of the provincial leaders deemed  the North Coast a place to put in an appearance, the closest that the Premier and Liberal leader got was Terrace a contest that many in the province will be watching on Saturday night.

BC's third party, the Greens, apparently aren't quite ready to build on their foundation of the past in the Northwest, as they couldn't get their organizing skills together and didn't even run candidates this time around.

Maybe in the end, we'll just settle for what we had on September 20th, a minority government that seemed to be working well, despite the apparent urgency for the Premier to disband it and seek the larger mandate.

You have a role to play in those options, and that comes with casting a ballot, in Prince Rupert you can do that tomorrow from 8 AM to 8 PM at the Jim Ciccone Civic Centre.

To catch up on the ebb and flow of a most unusual campaign over the last thirty three days see our Election 2020 archive page here.