North Coast incumbent Jennifer Rice roared out to a fast lead and never really looked back, as the seven year veteran of the BC Legislature retained the constituency for the NDP holding a significant lead through much of the evening and never really having to check to see if the gap had closed.
Ms Rice had a larger percentage of the vote this time around at 72.79%, an indication that the NDP was very successful in getting the hard core vote of their faithful supporters out, the incumbent claiming the victory with 3,894 votes, compared to the 5,242 she received in 2017.
The Liberals were down significantly from their 2017 totals, with candidate Roy Jones Junior attracting only 1,218 votes or 22.7 percent, Libertarian Jody Craven's unusual campaign found 238 converts, giving the Kitimat resident 4.45% of the North Coast Vote.
The Liberal vote of 1,218 suggesting that many of the 2,839 who voted for Herb Pond in 2017 decided to sit out the 2020 election.
Overall there were significantly less voters casting a ballot this year, perhaps a silent protest over an election in the midst of a pandemic that few really wanted.
In the last election, 9,149 of 15,030 potential North Coast voters made the trip to the voting booth, this year only 5,350 of those potential voters bothered to vote.  917 Vote by Mail packages have yet to be counted, but they will have little impact on the North Coast results.
All in all, the voter turnout is a concerning statistic that suggests a disconnect between many in the region and the political process and its politicians. 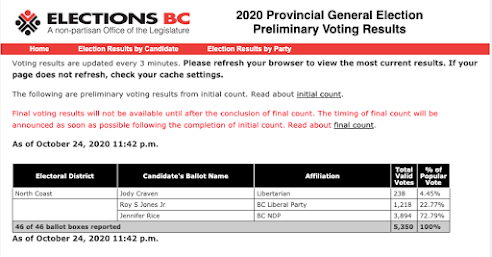 Elsewhere, Skeena remained on the Liberal side of the Ledger with Ellis Ross returned to office; turning aside a strong but unsuccessful challenge from the NDP's Nicole Halbauer. 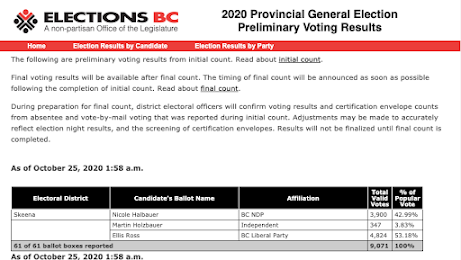 In Nechako Lakes Liberal John Rustad, had little difficulty in returning to the Legislature. 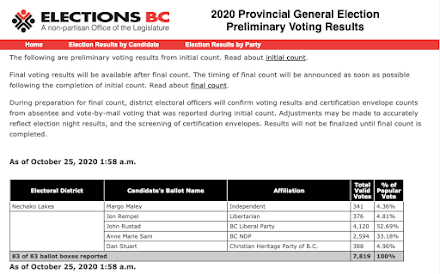 Nathan Cullen came out of a campaign which featured more than a fair bit of controversy as the elected MLA for Stikine; keeping the riding in the hands of the NDP.
Though Cullen's path was surprisingly a bit more challenging than that of the former incumbent NDP Minister Doug Donaldson.
At the end of the night the new MLA for Stikine had less than 50% of the vote, while Donaldson collected over 52 percent in 2017.
The overall vote total was down from 2017 as well, in the previous election 9,113 of Stikine's near 14,000 registered voters cast a ballot that year.
Saturday only 5,952 voters marked their X, with 1,234 vote by mail packages still be counted at final confirmation time. 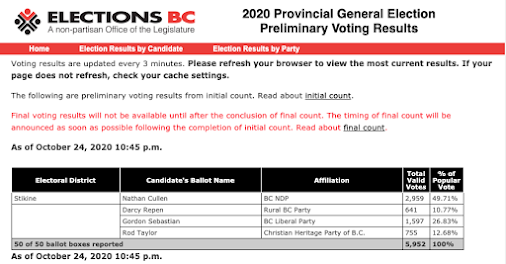 As for the provincial scene, the Horgan Majority Government was declared by multiple news organizations by 945 PM, with the NDP picking up a number of ridings at the expense of Andrew Wilkinson's Liberals.
Such was the scope of the NDP success, that the mail in ballots which won't be reviewed for another two weeks will seemingly have little in the way of impact on the final standings for the Legislature, with perhaps only one or two potential shifts in the final tallies of particularly close races. 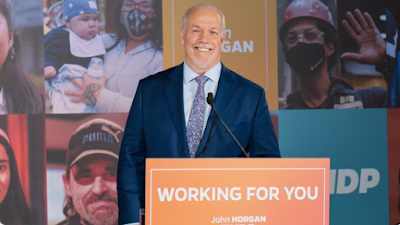 As the evening came to a close the NDP had been elected or leading in 55 seats, the Liberals 29 and the Green party held three seats, the same amount they had at the time of the election call.
Up next for John Horgan will be the creation of a new cabinet and some high profile ministries to fill positions for after retirements prior to the vote.
He also has some well known former Federal faces in his new government (among them Stikine's Nathan Cullen), who no doubt are anticipating a tap on the shoulder for a position; as well as some ridings taken from the Liberals which with a cabinet position could remain with the NDP into the future.
How that will impact on any opportunity for the North Coast's MLA to make it to the inner circle around the cabinet table will play out over the next few weeks.
For the BC Liberals, the results indicate a number of problems, from a campaign that did not resonate with the voters, and a leader in Andrew Wilkinson who never really connected with the voters and most likely will be looking at his future.
His comments following the vote count themes that didn't really address some of the failings of the Liberal campaign, which never really seemed to get up to speed.
As well, the Liberals suffered significant voter erosion to a number of other political options, particularly to the BC Conservative party, all of which suggests that the once solid block of centre right voters may be splintering towards any manner of options.
That will be a key factor for BC Liberals as they consider their future and who may be best to try and rekindle their ability to hold that coalition strong.
We'll have more notes on the provincial election in the days to come, you can view all our themes from the campaign from our archive page here.
Posted by . at 12:23 AM