Ice In, Markings on ... Curling Season set to go

It wasn't too long ago that it looked pretty dire for the Prince Rupert Curling Club, the need for a new ice making machine making for a lost season for the roaring game on the North Coast and fears for some that the sport may fade from the local scene.

One year later and even in the midst of a pandemic and things however look much better for the members of the Prince Rupert Curling Club. With much of the positive view coming from the tireless efforts of their membership led by Natasha Lebedick and a bit of good fortune in success in seeking out some grant funding.

As we outlined in September, the new ice plant was put in place over the summer, with a work party taking to the newly installed sheets earlier this month to put in place the familiar rings of the House, the latest signal that curling is back and the curlers almost ready to throw some rocks.

The success towards putting i the new ice coming through a 250,000 dollar grant from Northern Development Initiative Trust delivered in March, which brought much in the way of relief for the local curling community.

The new season comes with a number of additional measures to reflect our current concerns over COVID, requiring the creation of a Return to Curl Plan which was outlined for members in October. 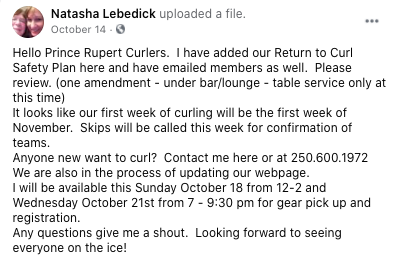 Registration for the 2020 season got underway earlier this month and if you would like to see if space is available for your group to join the 100 or so members that call the club home contact Natasha  at 250-600-1972.

League games take place on Wednesdays and Fridays at the Seal Cove facility.

Plans were for the first of the years action to get underway this week, you can follow their action through the year from their facebook page.

For more notes on Curling in the Northwest see our archive page here.