Environment Canada appears to have missed the Sunday afternoon snowfall that began midway through the day and continues on now into the evening; revising their weather talking points focused on rain late in the afternoon.
Shifting to a mention of snow in the evening, something for which those who may have spent some time with shovel in hand might have wanted a heads up on. 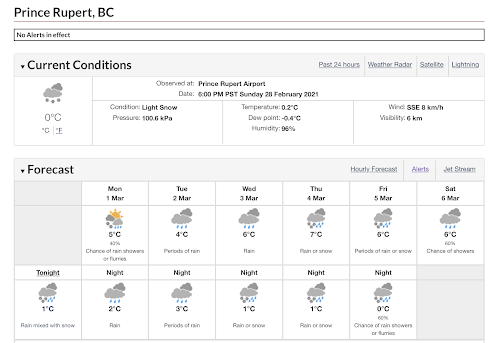 The light dumping of snow bringing a few centimetres so far, with more accumulating, making for slick driving conditions.
The Drive BC website has a common refrain from the Fairview Ferry Terminal to the Terrace Roundabout that of Slushy sections along the entire route.
A snapshot of the conditions from west to east can be found from the BC Highways Camera locations, though the weather appears to have knocked the Terrace cameras off the network for now.

Earlier this afternoon Highway 37 A was closed for avalanche control, something which continue to this hour.

You can access the latest road conditions from the Drive BC website and Twitter feed.
Our archive of links to the Highway cameras can be found here.
According to Environment Canada the current precipitation will shift to rain overnight with up to 20 mm anticipated, though depending on the cold air aloft, you may yet have some more shovelling ahead of you on Monday morning.
Updates on the weather can be found from the Environment Canada website.
For more notes on past highway themes see our archive page here.
Posted by . at 6:28 PM