Those with concerns over the safety of railway transportation across Northwestern British Columbia will want to review the list of changes now approved by the Federal Government, as they look to address the risk factors for derailments caused by railway infrastructure.
The changes were introduced by Minister of Transport Omar Alghabra who observed the following:
“Canada maintains one of the safest rail systems in the world as a result of shared efforts between our government and numerous partners, including railway companies and communities. Today, we are making changes to address risks associated with the transportation of dangerous goods by rail, including train speed, colder weather operations and further strengthening track maintenance and inspection practices. Our government is committed to continuing to work to build an even safer Canada for everyone.”
Towards the changes to be put in place, the revised Rules Respecting Key Trains and Key Routes, under the Railway Safety Act, now include:
Require railway companies to develop a winter operation plan that is specific to each subdivision where higher risk key trains operate, which must be approved by a professional engineer;
Require use of new technology to detect a broken rail in areas where it is not currently present;
Strengthen track inspection (increased frequency and improved quality) and track maintenance requirements (i.e., ultrasonically testing replacement rail and improved record-keeping); and,
Define a ‘higher risk key train’ as a train carrying large quantities of crude oil or liquid petroleum gases and prescribe speed restrictions for these trains.
More on today's announcement can be explored here. 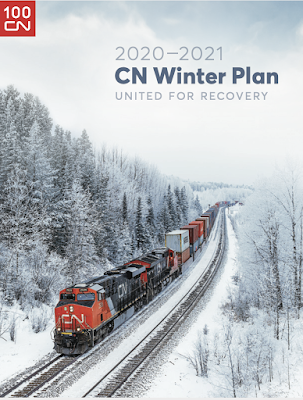 CN Rail regularly provides for a Winter Operations Plan, you can review this years edition here.
Last month we took note of some of the safety concerns from Northwest environmental groups who have concerns over the volume of dangerous goods that transits across Northern British Columbia towards port facilities in Prince Rupert.
For more notes related to the operations of Canadian National Railway across Northwestern BC see our archive page here.
Posted by . at 11:08 AM