Councillor Cunningham renews call for development of Condos for Seniors

The quest for housing for home owning Seniors to downsize into has been an oft heard call at Prince Rupert City Council, but one which so far has delivered few results.

Last week, Councillor Barry Cunningham brought it back to the top of the discussion list seeking some community feedback to the topic of development in the city.

The Councillor used his social media platform of Facebook on February 9th to reintroduce  the theme, one which was well received judging by the follow up comments that were delivered by his readers, many of them with some good suggestions for him to share with Council if he wishes. 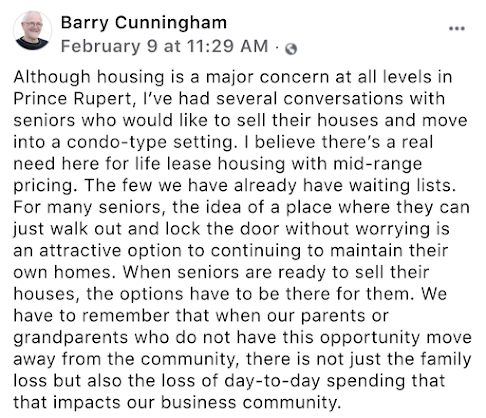 The topic has been a daunting one for City Council over the years, as proposals were approved but in some cases never moved forward. The reasons varied from changing personal situations for the proponents, to the decisions of potential property developers who chose to leave this market for other communities.
Though in the last number of years, explanations as to the lack of development make for an element of the discussion on housing that rarely it seems gets a follow up from the Council members.
Still if there is a demand as the Councillor believes, one would think that it's only a matter of time before someone looks to fill the void that Council first took note of more than seven years ago.

This year the City took a new approach towards offering incentives towards housing in the community, with the recently approved Downtown Tax Incentive Bylaw program one possible program that may finally see some foundations make their way onto some land in the specified downtown areas with rental and condo developments rising on the city's skyline.

The need for all types of housing has been a theme that has dogged council since most of the current office holders joined the debate in 2014, as well as for those who joined four years later.

Though in seven years, while there has been much in the way of discussion,  a number of those goals of the early days still remain unfulfilled to date.

Some of those past calls for development can be reviewed below, this list also a helpful guide to past projects that offered much promise but eventually were dashed without further comment, as well as to  those that made it to the finish line:

February 1 -- Work on Digby Tower a potential sign of some relief for the city's housing crunch; that as City Council makes note of housing as a priority for 2021

November 14  -- A call for priority status for housing issues in Prince Rupert
November 7  -- Official Opening of Cedar Village charts path to December occupancy
October 24 -- New Operators of pair of Prince Rupert Seniors residences look to the future with growth in mind
August 21 -- Observations on the state of downtown and lack of housing make for contribution to public comment period of Council session
May 15 -- For Chamberlin Avenue site, everything old will be new again ...
May 2 -- Neptune Inn zoning to go to Public Hearing May 13th
April 3 -- Park Avenue land back on the Prince Rupert real estate market
February 28 -- No Building for Old men (or Women) Neptune Inn building to revert to status as hotel accommodation

Considering the list of previous proposals having fallen by the wayside and little real progress on the niche area of Seniors housing to be found to date, Mr. Cunningham's goal for options for Seniors residences still seems quite far off.

Hopefully Council will see some success from the city's latest property tax exemption plan delivering on this desire to ensure that Seniors that wish to remain in the community have an option.

Other that is, then to pack up and relocate to a community with suitable housing stock.

For further items of note on housing in Prince Rupert see our archive page here.

A wider overview of past Council Discussion themes is available here.