The long awaited approval from the Ministry of Education has finally been granted and with the notification from Victoria, School District 52 can now put the Kanata School property on the market.

At their May 12th meeting, SD 52 confided that the property is now listed, with Victory Prystay of Royal Lepage the listing agent for the tract of land on Ottawa avenue, in the eastern side of the  Crestview Drive area.

The listing price is $975,000, the approval from the Ministry will reduce the time needed to conclude a sale to the successful bidder.

The property is Zoned P-1 (Public Facilities) but designated for residential use in the City's Official Community Plan.

One third  or roughly 1.87 acres of the 6.23 acre site was developed in 1967 as the now closed Kanata Elementary School.

The balance of the site, of near 4.36 acres is currently undeveloped. 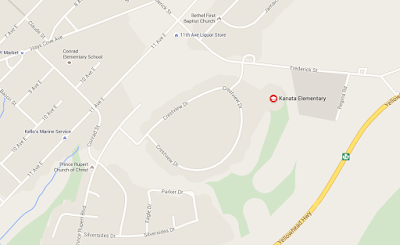 The listing for the Kanata property can be found on the Royal LePage website.

The School District recently appeared at a Public Hearing at Prince Rupert City Council regarding a rezoning application  for a property adjoining the Kanata property.

At the Hearing he also expressed the concerns that the School District had over the then proposed rezoning of industrial land nearby.

Council subsequently chose to re-zone the industrial land, despite those concerns of the School District.
Posted by . at 10:16 AM

Email ThisBlogThis!Share to TwitterShare to FacebookShare to Pinterest
Labels: Kanata School area cleared for sale by Ministry of Education