While the fate of the proposed Pacific NorthWest LNG Terminal for Lelu Island still remains to be determined, the company that will be providing the pipeline to the terminal is making strides in its preparations to start construction of it's link between the gas fields of Northeast BC and the North Coast.

On Friday the Prince Rupert Gas Transmission Project was granted its first two permits from the British Columbia Oil and Gas Commission, gaining approval for stretches of pipeline from Hudson's Hope to Fort St. James. 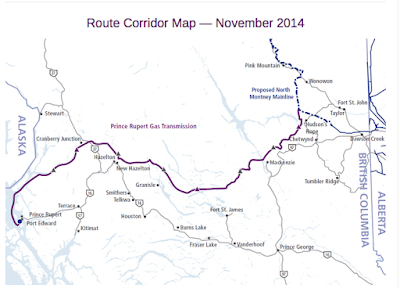 "Receiving these first two permits is very good news and represents another key milestone for our project ... Combined with our recently announced project agreements with certain First Nations communities that highlighted the economic benefits they would receive, the issuance of these permits demonstrates that TransCanada is listening and remains committed to participating in the development of the province's liquefied natural gas export industry in a safe and environmentally responsible manner." -- Mr. Dean Patry, President of PRGT on the receipt of two of eleven permits for the natural gas pipeline to the North Coast.

The two permits granted last week, mark the first of the eleven permits that the company has applied for and provide the project with the authority to proceed with construction of the pipeline and related facilities.

However, while they have the first of their permits in hand, PRGT noted last week that no work would actually commence until a Final investment decision has been made by Pacific NorthWest LNG, the company is currently involved in its CEAA process, with a hopeful completion sometime over the summer or fall.

It's not expected that Pacific NorthWest LNG will make its Final Investment Decision until it has secured approval from the CEAA.

For more background on the PRGT permits see this media release.

A look at the pipeline project overview can be found from the company website.

For further information related to the Pacific Northwest LNG project see our archive page.
Posted by . at 8:30 AM

Email ThisBlogThis!Share to TwitterShare to FacebookShare to Pinterest
Labels: PRGT gains approval for two stretches of pipeline in NE BC