Cash Mobs return to the streets May 30th 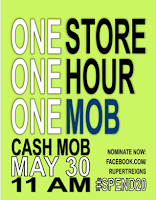 The popular Cash Mob project run through Community Futures of the Pacific NorthWest and the Prince Rupert and District Chamber of Commerce makes its return to the streets of Prince Rupert later this month.

Nominations now being taken by the event organizers to help to select which local commercial business will find their store, or service the target for the May mob.

The success of last years Cash Mob delivered customers to stores that perhaps they had not been to before, with each participating member of the Mob spending 20 dollars as part of the promotion to encourage residents to support local small business in the community.

The Mob will form on the morning of Saturday, May 30th at 11 AM, with the destination revealed at that time with the spending to start shortly after.

You can submit your deserving target by using either the Rupert Reigns Facebook page or website to provide your recommendation, making sure to tag your  suggestion with #Spend20

A look at some of the targeted business for 2014 can be found below.

More background on commercial developments in the Northwest can be found on our archive page here.
Posted by . at 9:02 AM