Prince Rupert City Council's plans to add to the listings of city workers is moving at a pretty quick pace these days, the latest indication of the hiring times coming to the City a notice this week outlining that applications for Casual Positions are now being accepted by the city.

The Notice which outlines the various requirements for employment, notes that those that are accepted into the casual labour lists, could lead to full time employment in the future.

The latest hiring notice on the city's suddenly active jobs page, is part of an accelerated hiring program recently approved by City Council, something that Mayor Brain outlined in the recent Spring Community Update. 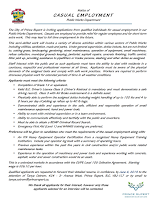 The  most recent job opportunities that have been considered by Council are positions the City believes need to be filled, with Mayor Brain stating at last Monday's Council session that increasing the staff levels for the City is something that they  absolutely must do to help get to a new level.

As we outlined last week, some of those recent positions made available for application include a Communications Manager for the City, IT and GIS support and a Superintendent for the Golf Course to name a few.

You can review the details of the City's latest job posting for casual labour positions here.

The deadline for applications is June 4th.

For more items from Prince Rupert City Hall see our Discussions page here.
Posted by . at 8:32 AM

Email ThisBlogThis!Share to TwitterShare to FacebookShare to Pinterest
Labels: More hiring ahead for City of Prince Rupert