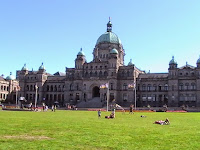 Education was the topic of discussion earlier this week.  as North Coast MLA Jennifer Rice spoke Monday as part of proceedings related to Bill 11, the Education Statutes Amendment Act of 2015.

Ms. Rice outlined her thoughts on concerns that she has  over what she described as the rushed nature of the legislation, a process that she believes deserves further study.

Her opening remarks focused on some of the challenges that educators in the various reaches of the North Coast Riding have to face in their day to day work, many of them as she notes who have to work with limited support or resources.

I want to start with noting that we have extraordinary teachers in this province of British Columbia. I'd like to acknowledge the school districts that I represent in North Coast. School district 50 in Haida Gwaii, which actually is an example of extraordinary teachers, support workers and counsellors. In school district 50, between Masset and Port Clements, we have a school counsellor who works a 0.4 position and serves three schools.

This is an area of the province with high suicide rates. This counsellor is running herself ragged serving these communities, serving these school districts, and I just wanted to acknowledge the outstanding service that she provides.

As part of her review of some of the key components of Bill 11, Ms. Rice  took issue with the four major positions of the proposed legislation.

Highlighting her concerns over the Framework of continuing Professional Development, Delivery of Shared Services among School Districts, updating the accountability framework for student learning and aligning student data with the Freedom of Information  and Protection of Privacy Act.

She noted that a number of stakeholders have identified the amendments in the bill as designed to further centralize government control over eduction, despite a state commitment towards co-governance with school boards.

She further added that as part of their efforts the government has failed to consult with teachers on the proposed changes to professional development, which Ms. Rice suggested shows a lack of respect for teachers.

You can review her full speech to the Legislature on the issue from the record of Monday afternoon, it starts at the 15:30 mark continuing through to just past the 15:40 point.

It is also available for viewing through the Legislature Video Archive (see Chamber Video for Monday Afternoon, Ms. Rice's contribution to the discussion can be found at 15:40)

For more items related to the work of MLA Rice at the Legislature see our archive page here.

Further background on Education issues can be reviewed here.
Posted by . at 9:46 AM